The Blue Jays look to continue rolling against the lowly White Sox tonight as R.A. Dickey takes the mound against lefty John Danks. The 29-year-old southpaw is in his eighth season with the South Siders and is his usual middle of the rotation self. He had shoulder surgery in 2012 and just hasn't been as successful as he used to be, which is a shame for the Chicago fans. His 4.34 ERA this season is probably as good as it's going to get for Danks and likely is fair value to the White Sox for a $14.2 million/year pitcher.

The Texas native actually hasn't faced the Blue Jays since his shoulder surgery in 2012, with his last start against Toronto coming on May 29, 2011 in a blow out win for the Jays. That doesn't mean there isn't any history between Danks and the Blue Jays though, with Jose Bautista and the lefty exchanging some heated words during that rout three years ago. Here's the incident with some great unbiased announcing:

Danks is pretty simple in his repertoire, mainly just throwing a fastball, cutter, and changeup. The cutter used to be his favourite secondary pitch pre-surgery, but that distinction is now saved for his changeup: 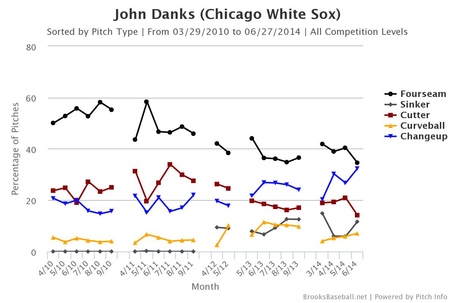 Danks also lost velocity in the past few years (his fastball is now about 89 mph), which has increased his struggle to get hitters out even more. That being said, if the Texan can hone in on his command and perfect his pitchability, there's doesn't seem to be anything stopping him from becoming the next Mark Buehrle for the White Sox.

Will the Blue Jays bow to The Danks Theory or not? Oh the intrigue!

Find the link between John Danks and the ship that Rose and Jack Dawson sailed on.