After last night's win got a little too close for comfort, R.A. Dickey goes to the mound this evening looking to make it four in a row for the surging Blue Jays. Opposing him is New Jersey right-hander Rick Porcello who has a 3.68 ERA on the season. Porcello normally has an ERA way above his FIP thanks to some high BABIP's the last few seasons, but this year his ERA is sitting comfortably under his 3.93 FIP in part because the Tigers defence is helping him out a little bit more this year.

The right-hander distributes his pitch selection pretty evenly with fastballs and sinkers leading the way, while the changeup, curveball, and slider have all been thrown about 130 times this year (10%-15%). Against right-handers, Porcello mainly relies on a fastball and slider combination, but brings his curveball and changeup into play against opposite-handed batters.

The movement on his pitches is where he really shines, with his changeup perfectly mimicking his sinker with a difference of about 9 MPH being the only thing separating the two offerings: 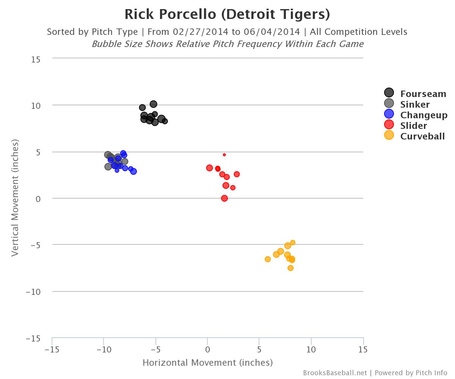 As you can see from the chart above, Porcello also throws a nasty curveball that has a ton of break coming out of his 6'5" frame. In a piece published today, he told FanGraphs that he developed the curve because his sinker and changeup were so similar. It's mainly thrown when he's ahead in the count or with two strikes and it can make hitters look downright silly:

Even with his additional weapons in play against left-handed hitters, Porcello still has pretty big platoon splits making a lefty-heavy lineup the best option for John Gibbons.

Find the link between Rick Porcello and the Blue Jays second baseman who has 881 hits with the team.

Rick Porcello's finally has some defence behind him, making him a dangerous starter to match up against.