A Saturday 1:07 start this afternoon sees Blue Jays ace Mark Buehrle go up against Shelby "how the mighty have fallen" Miller. The Texas right-hander was the 19th overall pick in the 2009 draft, one pick ahead of Chad Jenkins, and rocketed up prospect lists even landing in the top organizational spot in 2011, 2012, and #2 in 2013. As Ben Humphrey of Viva El Birdos mentioned in the "View from the Other Side" post yesterday, things took a bit of a turn:

The righty had a solid rookie campaign that saw him place third in the NL Rookie of the Year vote (behind Puig and Fernandez, who are no slouches). Then the club buried him in October and reports surfaced of shoulder issues toward the end of the year. In 2013, Miller threw his four-seamer about 75% of the time. The pitch had speed, movement, and indefinable deception. This year, the pitch has been nowhere near as good.... Watching him pitch is like watching a cornered animal. There's nowhere for him to run or hide.

So it sounds like all is not as good as it seems with the Cardinals young stud group of pitchers. This year, Miller has a 4.06 ERA with his strikeouts way down and his walks way up. His BABIP is around his career average, so these struggles are pretty real and it's up to the Cardinals to figure out what to do with the former ace of their minor leagues. No one is chasing his pitches any more (27.2 O-swing% last year vs. 20.5% this year) and when hitters do swing, they more often than not make contact.

As many people know, Miller basically just throws a fastball and curveball occasionally tossing in a cutter. He still throws mid-90's so his struggles can't be blamed too much on a loss of velocity. If the solution was easy then you can bet the Cardinals would have fixed Miller by now, but the answer to these sorts of problems is rarely an simple one. As Ben mentioned, the fastball has lost some of its filth and as you can see it also has lost some of it's arm-side movement (black dot on the left is 2013, while black dot to the right is 2014): 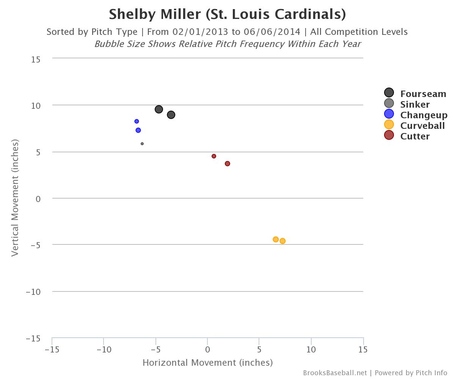 Left-handed hitters smash Shelby Miller, which is a little surprising because his curveball should be tougher on them.

Find the link between Shelby Miller and the Pittsburgh Pirates left fielder.

Shelby Miller has stopped tricking MLB hitters and the Blue Jays should enjoy his fastball.