Share All sharing options for: Shelby Miller shuts out the Blue Jays as the Cardinals win 5-0

A day after John Gibbons returned to a .500 career managerial winning percentage at 417-417, the record fell back below the even mark after the Blue Jays snapped their six-game winning streak on Sunday afternoon, losing 5-0 to the Cardinals. That must have disappointed the 42,981 fans who made it past traffic and a subway closure to attend the game, but a good number of them got to run the bases afterwards, so it's not too bad.

Just a reminder: the Blue Jays are still in first place and have a 38-25 record, which translates to a .603 winning percentage. No need to freak out.

This afternoon, Cardinals starter Shelby Miller wasn't the shaky starter he was billed as coming into this series. Miller was as perfect as the weather through the first four innings, inducing a lot of pop-ups from the Blue Jays' bats. There were a several of well-hit balls: Jose Bautista (in the first), Juan Francisco (in the fifth), and Brett Lawrie (in the seventh) all gave Acer some free screen time with blasts to the warning track that went for outs.

It wasn't until an Adam Lind walk in the fifth that Miller had to pitch from the stretch, and it was two outs into the sixth before Jose Reyes got Toronto's first hit of the game. Reyes eventually reached third on Melky Cabrera's funny turf bounce in front of Allen Craig, but they were both erased after Miller struck out Bautista to end the inning.

Miller authored his second complete game (and second shutout) of his young career, allowing just three hits and a walk to the powerhouse Blue Jays lineup. He wasn't as dominating as his almost-perfect game last May 10 against the Rockies, but he was good enough to snap Toronto's 47-game streak without being shut out.

On the home side, Mark Buehrle came out of the bullpen gates strong, getting through a 1-2-3 first on just eight pitches, but was not nearly as sharp as he has been in previous starts for the rest of the game. Buehrle struck out six (half looking) only gave up one run--a Randal Grichuk solo homer in the fifth--but allowed the Cardinals to reach in each inning after the first with five walks and five hits.

In the top of the seventh inning, with the score still 1-0, leadoff hitter Peter Bourjos singled, but the Cardinals called for a sacrifice bunt to advance the runner. After that gifted out, Matt Carpenter grounded out and Grichuk struck out to end the inning.

Aaron Loup, coming off of a majestic relief outing against the Tigers, started the eighth inning and allowed Allen Craig to double with one out. John Gibbons then called for an intentionally walk to Jhonny Peralta in order to set up a potential inning-ending double play. That didn't happen. Oscar Taveras singled to right to load the bases, and then Loup walked a run in. After a strike out, Tony Cruz made it 4-0 on a solid two-run single up the middle. Steve Delabar, with a freshly trimmed beard, found out that changing facial hair style does not immediately change one's fortunes. He walked Carpenter to load the bases, and then walked Grichuk to make it 5-0 Cards.

Todd Redmond struck out two in his inning of work after Jose Reyes booted a grounder to star the inning. Redmond did not walk any. 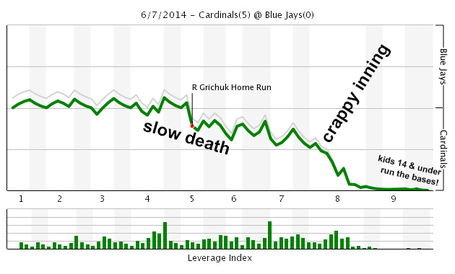 Jays of the Day! Mark Buehrle (+.255 WPA) gets it for holding the Cardinals to just one run.

The Blue Jays will be looking for a series win on Sunday at 1 pm in front of a packed house for Jose Reyes Bobblehead Day. We will have a GameThread up just before the game. If you're not at the park, join us, won't you?