The Brewers come into town for a quick two-game set today and tomorrow with both games getting underway in the afternoon. Today is of course Canada Day so hopefully you're enjoying the day off and the Blue Jays can make the holiday a little sweeter for us up north. The Brewers have had a similar season to Toronto in the sense that they weren't favourites to win their divisions but they both currently sit atop them, with Milwaukee currently sporting a 51-33 record that puts them a fair number of games up on anybody else in the National Central.

The Brewers have gotten great performances from their obvious stars like Jonathan Lucroy and Ryan Braun (BOO), but they've also gotten massive contributions from relative unknowns such as Scooter Gennett and Khris Davis. Gennett has pretty much wrestled the starting second baseman job away from Rickie Weeks with a .351 OBP this season and has quietly become a top 2B in the game (he currently has more WAR than Robinson Cano). 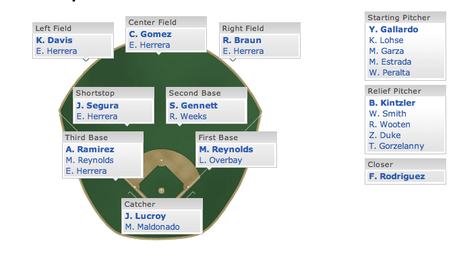 The pitching matchup today sees Drew Hutchison going up  gainst Marco Estrada this afternoon. Estrada is a Mexican righty who will turn 31 on Saturday. He's pitched horribly this year and has had horrible luck to boot so he'll be looking to try and get his season going in the right direction today. The problems of Estrada's season can be summarized in one little graph: 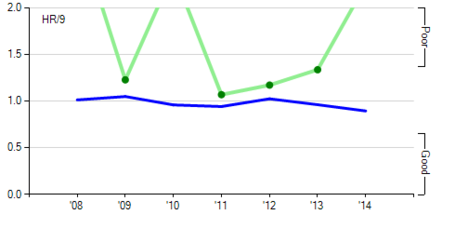 That's a 2.25 HR/9 rate (17.3% HR/FB) to go along with a 34.8% GB%, which has caused all sorts of problems for the Brewers starter. His repertoire is extremely simple with 55% of his pitches being fastballs, while changeups and curveballs make up the difference. No one is whiffing on his pitches and his fastball and changeup are being launched into orbit at an alarming rate. 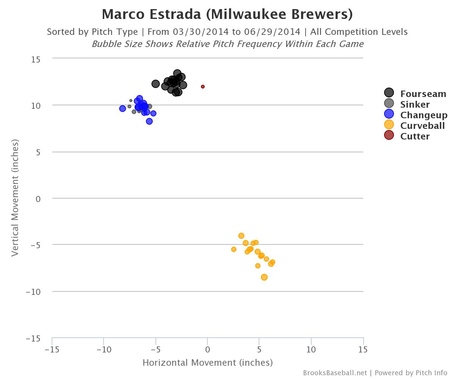 Find the link between Marco Estrada and the former 2014 Blue Jay on the Nashville Sounds PCL team.