After 14 Years, Dustin McGowan Has Finally Found His Role

Share All sharing options for: After 14 Years, Dustin McGowan Has Finally Found His Role

Back in June of the year 2000 at a time when Britney Spears was releasing her second album, the Blue Jays drafted a right-hander out of high school in Georgia with the #33 pick. Young Dustin McGowan was considered an electric arm who would tear up the lower minor leagues before bursting onto the big league scene. Unfortunately for the 6'3" righty, arm and shoulder troubles would catch up to him before he could make any sort of big impact at the highest level and years upon years of his career would be lost to constant rehabbing and injury set backs.

McGowan finally returned to the Blue Jays last season and was pretty dang good out of the bullpen in 25 appearances. That was considered a warm up for this season where he competed for and won a rotation job with Toronto, which happened to be a Home Opener start. As someone who was at the game, I don't think that start was as 'feel good' as it was supposed to be. Seven more starts came after that and although there were some bright spots, it was largely a disappointing return to the big league rotation for McGowan. It turned out that his arm couldn't handle the heavy workload after so many surgeries:

McGowan says decision to take him out of the rotation was necessary. He wasn't recovering well between starts. #Bluejays #Jays

The Jays were left no choice but to shift McGowan to the bullpen and hope he earned his $1.5 million salary this season. Since his first appearance out of the bullpen on May 18th, the righty has appeared in 20 games and posted zeroes on the board in 17 of them. That adds up to a 1.71 ERA and a 20.5 K%, although he does have a BABIP of .185 so there's a possibility that this is a bubble waiting to burst.

His stuff has come back in a big way, reminding us of the vintage McGowan that SBN's own John Sickels described for ESPN back in 2004:

McGowan's best pitch is his fastball, a 95-mph sinker. The pitch has good movement, and can be quite overpowering. His secondary offerings include a curveball, a slider, and a changeup. All three are solid most of the time, occasionally excellent. He's been much more consistent with them over the last year.

Although all of McGowan's work this offseason on his curveball hasn't seemed to work out (he's only thrown it 15 times this year), his fastball, slider, and changeup have all returned to top form. What's especially amazing is that the 95 mph fastball Sickels described is miraculously back to his pre-surgery velocity after years of iffy radar readings on the pitch: 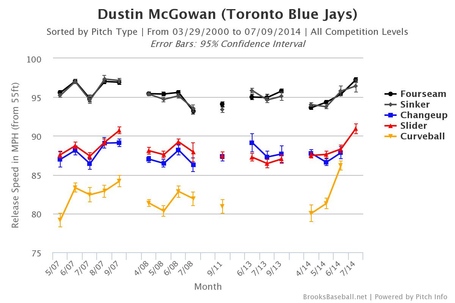 In fact, this month has seen McGowan hit high-90's consistently with his fastballs, which is amazing considering all that his right arm and shoulder has been through. It's safe to say that the move to the bullpen did nothing but good things for the velocity: 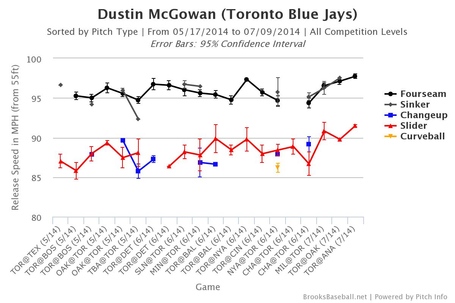 Although McGowan has largely ditched his sinker since his placement in the bullpen, his fastball-slider combination has been dominant and hitters are having a ton of trouble making solid contact. Since the switch, his filthy slider has a whiff/swing rate of 43.33% reminding Blue Jays fans of the potential he flashed nearly a decade ago.

Looking forward, McGowan should be used by John Gibbons as a dependable setup man alongside Aaron Loup depending on the handedness of the upcoming hitters. Looking even farther into the future, McGowan has a $4 million option for 2015 that was tacked on to the $3 million extension that he signed with the Blue Jays before the 2013 season. Assuming McGowan continues pitching so well out of the bullpen, the option should certainly picked up and with Casey Janssen likely leaving as a free agent after this season, the 2015 closer position could be an open competition between a number of remaining pitchers in the bullpen.

All that matters for 2014 though is that McGowan continues to wheel and deal out of the bullpen, repaying the Blue Jays for their extreme patience through all of the injury troubles of the last decade. At a time when there isn't a lot to feel good about with the Blue Jays, this story definitely makes you feel like the baseball gods don't completely hate Canada.