Today's game gets underway from Tropicana Field as the Blue Jays and Rays play the second last game before the All-Star Break at 4:10 pm. The Blue Jays will be facing the Rays' third-best today in Jake Odorizzi instead of David Price, who is sick with a virus.

Price is not the only one not right today, as the Blue Jays have announced that Nolan Reimold is off to the 15-day disabled list, joining fellow recent waiver acquisition Cole Gillespie.

Nolan Reimold to DL with a left calf strain. Anthony Gose up from Buffalo, per #BlueJays' release. #MLB #Rays

Odorizzi, a 24-year-old Illinois native, came over to Tampa with Wil Myers in the James Shields trade and has been pretty good in his first full season in the major leagues. His 26.7 K% is exactly why the Rays acquired him, although a .321 BABIP has caused his ERA of 4.10 to greatly underperform his FIP of 3.29. With a 34.0 GB% this season, I think it's fair to say that Jake Odorizzi is a legitimate fly ball pitcher. Going up against the righty today for the Blue Jays will be Drew Hutchison.

Last season Odorizzi was heavily a fastball and slider pitcher and well....he's not anymore at all. If you want the in-depth explanation on what's changed with Odorizzi then I suggest you go read this piece from D Rays Bay. To sum it up nicely, Alex Cobb helped Odorizzi develop a similar split-change to his own this offseason and it's become Jake's second favourite pitch. The movement on the pitch is now significantly nastier than his old changeup and it's paid off for the righty: 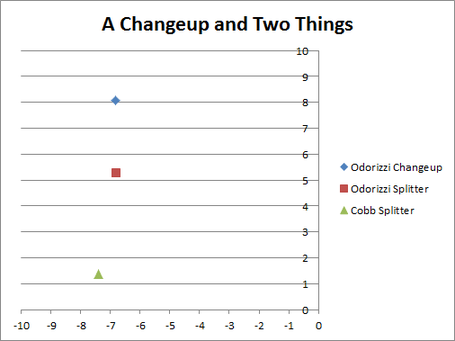 So while his fastball is still thrown nearly 60% of the time, Odorizzi's splitter is his second most-used pitch at 22%. In fact, against left-handed hitters the fastball-splitter combo is almost exclusively what he throws, while he reverts to his old fastball and slider against same-handed hitters. Let's take a look at a GIF of it (click to watch):

Find the link between Jake Odorizzi and the youngest son of King Louis XVI and Marie Antoinette.

Editorial note: an incorrect version of the Game Preview, indicating that David Price was the starting pitcher today, was posted earlier. We regret and apologize for the error.