Share All sharing options for: Welcome back, Brett Wallace: Blue Jays re-acquire first baseman from Orioles for some (small) amount of dollars

A trade! Not one of the magnitude most fans were looking for, but a minor league trade just went down, as announced by the Blue Jays, minutes after the Norfolk Tides reporter David Hall tweeted about it. Former First Baseman of the Future Brett Wallace has returned to the Blue Jays from the Orioles in exchange for some--probably miniscule--amount of cash.

#BlueJays announce they've traded for 1B Brett Wallace (yes, the guy they traded to get Gose). Cash goes to the #Orioles. #MLB

Wallace, who will be turning 28 in August, is hitting just .265/.329/.389 with 10 homers and 12 doubles through 90 games this season for the Tides, Baltimore's triple-A affiliate. He has yet to appear in the major leagues this season since signing a minor league contract with the Orioles several days after the Astros released him in spring training. 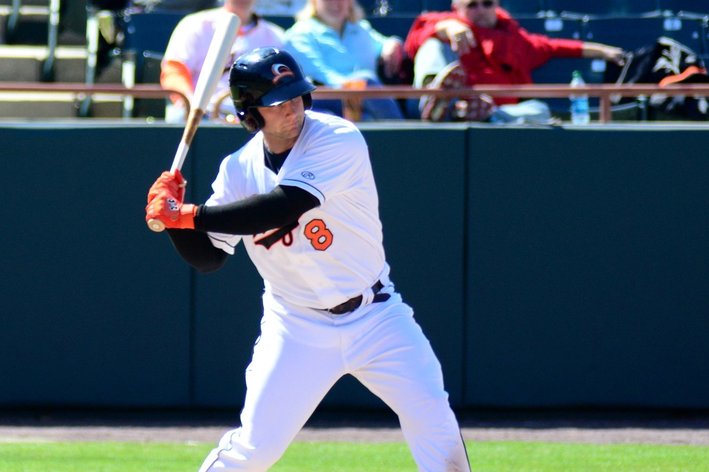 From Camden Chat: Orioles promoted first baseman Christian Walker from double-A, prompting them to trade Brett Wallace to the Blue Jays to make room for the up-and-coming first baseman, who had been hitting .300/.368/.518 in 94 games for Bowie.

After Dan Johnson's promotion to the major leagues, the Bisons have been fielding double-A call-up Mike McDade (also a Blue Jay who had left the organization and then come back) at first base. The former prospect is currently more of an organization filler-type than even a "quad-A" player who can serve as short-term major league help.

Wallace was a 42nd round pick by the Blue Jays under J.P. Ricciardi in the 2005 draft but instead chose to attend Arizona State. Incidentally, other players in that round that refused to sign included John Axford (six picks after Wallace) and Tim Lincecum (eight picks after Wallace). Going to college was probably the right choice for him, as three short years later he was selected 13th overall by the St. Louis Cardinals and received a $1.84 million bonus.

As a top prospect, it was noteworthy that he was involved in three trades two years into his professional career, which was a sign of concern by those who were following his development. He was first traded from the Cardinals to the Athletics for Matt Holliday, then from the A's to the Blue Jays for Michael Taylor, then from the Blue Jays to the Astros for Anthony Gose. As of today, Taylor has a career WAR of -1.0 through 26 games, Wallace is at -0.6 through 311 games, and Gose is at 1.1 (positive!) through 153 major league games.  I think we can say that the Cardinals probably won that series of trades.

Bluebird Banter's hugo wrote extensively about Wallace when the Blue Jays acquired him for the first time. Hugo was right to have had concerns about his defense over at third--the Blue Jays almost immediately shifted him to first after the trade. Just to put prospect porn-ing in perspective, read that piece by hugo about how good of a hitter Wallace was. He owns a major league batting slash line of .242/.313/.391 with 29 homers in just over 1000 plate appearances over four partial seasons.

Several days later, John Sickels released his top 20 Blue Jays prospects list for 2010. Sitting on top was Brett Wallace, followed by Zach Stewart, Travis d'Arnaud, and Chad Jenkins. With four years of hindsight, we see that the eighth-ranked Henderson Alvarez turned out to be the best out of the bunch.

Throughout 2010, while Wallace was batting .301/.359/.509 with 18 home runs in 95 games down in Las Vegas (thank heavens the Jays left there), he continued to be touted as the logical replacement for Lyle Overbay as the Blue Jays' next first baseman, so it was a shock when it was announced that the "major league ready" prospect was being swapped for a 19-year-old outfielder playing single-A ball. Bluebird Banter had two threads for the trade reaction. Again, reading through the comments are the best part (remember that was when we fans were still worshipping Alex Anthopoulos). In our poll, 56% of voters thought that in the long run, the Astros would win the trade:

I doubt Wallace will see any major league time with the Blue Jays (although at the current rate of injuries, it is possible), but if he does I will have to think of a new way of re-routing the train from GOSE to HALLADAY: 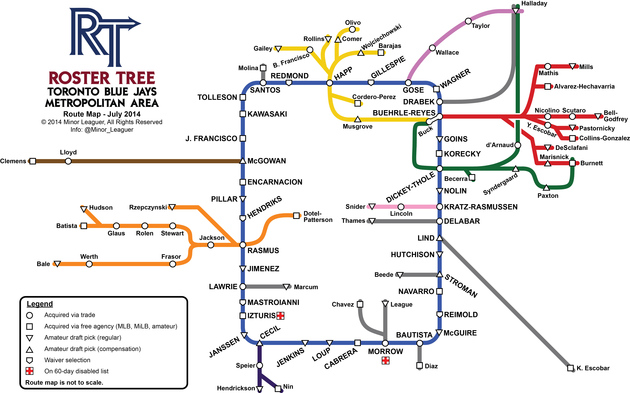 Click to enlarge. Image copyright: Minor Leaguer. All rights reserved, do not use without permission.

But I'm sure that would be the least of our worries if we ever do see Wallace in a Toronto uniform.