Casey Janssen has always been a crafty one, but in 2014 he's fooling hitters differently than he has in the past.

Share All sharing options for: Casey Janssen Has Hitters Hacking

Casey Janssen is undoubtedly one of the most interesting closers in the league.

Janssen pounds the zone with sub-90 fastballs and keeps hitters just off-balance enough to prevent major damage. His demeanor on the mound, and his visible and exaggerated exhales, seem to indicate the kind of nervousness that could ruin a closer. However, he has thrived in high-leverage situations pitching in the ninth for the Blue Jays.

This season, despite the problems the Jays have had in the bullpen, Janssen has remained stellar. With a 1.23 ERA and 14 saves it is tempting to think that the 32-year-old reliever is just humming along as usual, but that's not exactly the case.

For one his velocity has gotten even worse: 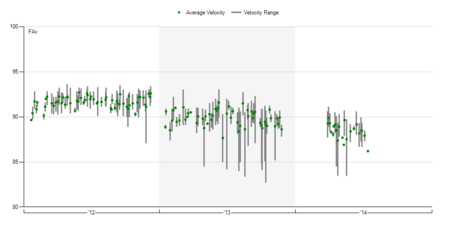 Along with his decrease in velocity has come a downturn in strikeouts: 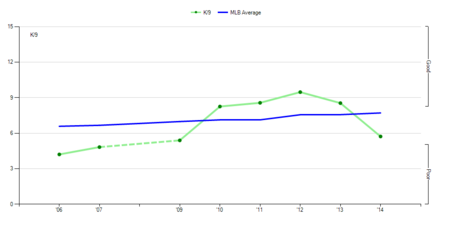 One positive trend, and perhaps Janssen's saving grace, has been the way he's cut down on his walks: 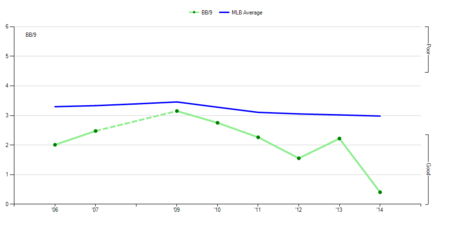 In fact, among pitchers who've pitched at least 20 innings (an admittedly convenient number given that Janssen has 22 IP to his name) Janssen has walked the lowest percentage of batters faced at 1.2%. In other words, the Jays closer has only walked one of the 84 batters that have come up against him. The sample size in this case is admittedly quite small, but it is not so small that it's not worth asking how Janssen had done so well at avoiding giving up the free pass.

The most intuitive assumption when it comes to pitchers cutting down on their walks is that they are pounding the zone more, and in Casey's case that is happening to an extent. His Zone% is 47.6%, which is higher than last year's total (42.7%), but actually below his career average (48.2%).

The biggest factor in Janssen's refusal to concede any walks has been his ability to generate more swings than ever before especially on pitches outside the strike zone:

Visually, the multitude of swings Janssen has generated so far looks like this: Now, getting batters to swing isn't always the best thing. Even the most casual fan knows that swings are what leads to things like singles, doubles, and home runs, which can really hurt a pitcher.

The best kind of swing from a pitcher's point of view if a whiff, all other swings are dangerous. Unfortunately for Toronto's closer, his whiff rates have not soared as a result of hitters swinging more. His whiff rate of 9.0% this year, is slightly higher than usual for him (his career average is 8.0%), but on a per swing basis it's actually down.

So if Casey Janssen is generating more swings, but not significantly more whiffs-not to mention less strikeouts- that would seem to indicate he's allowing more contact. On the surface that sounds problematic.

However, not all contact is created equal. Hitters are much more likely to get hits squaring up pitches in the zone, while connecting with pitches that should be balls is far less likely to yield a knock.

The chart below shows Janssen's contact rate allowed, inside and outside the zone:

Somehow Janssen is getting hitters to make more contact with "bad" pitches, while getting them to whiff more when the pitches are in the zone. Unless you are facing Vladimir Guerrero in his prime that is going to work out pretty nicely for a pitcher.

The analysis or reliever's in general and just over 20 innings from a pitcher specifically is a dangerous game. There is no drawing definitive conclusions to be done here.

What we do know is that hitters are swinging for more of Janssen's pitches than ever, and it's not going well for them.

It's not clear exactly why that would be the case. Janssen is attacking hitters with the same pitch mix he always has with worse velocity. To the untrained eye it wouldn't appear he has radically overhauled his delivery to add deception. However, whatever he's doing working as the proof is in the proverbial, albeit small-sample, pudding.

Janssen has always had an unusual way of coming across excellent results, but 2014 might be his most unusual season yet. He's excelling by getting more hitters to make more contact with his pitches while cutting down on velocity and strikeouts. Completely abstaining from walks hasn't hurt either.

In a bullpen that has been anything but consistent, Casey Janssen has been the dependable anchor. In some cases it is easy to confuse dependable with boring.

In Janssen's that would be quite the mistake.