The second game post-All-Star Break gets underway from the Rogers Centre this afternoon at 1:07pm as Marcus Stroman takes on Colby Lewis. The California-born righty has been really, really bad this year and he currently sits at an ERA of 6.54 and a BABIP of .410. His last start was downright dreadful, where he allowed 13 runs in just 2.1 innings against Oakland!

Lewis basically just throws a fastball and slider with some changeups and curveballs as well. The righty normally only hits high-80's on the radar gun and really hasn't fooled anyone this season. His changeup has some crazy arm-side sink, but he doesn't really use it all that much perferring instead to just stick his fastball and slider against hitters on both sides of the plate: 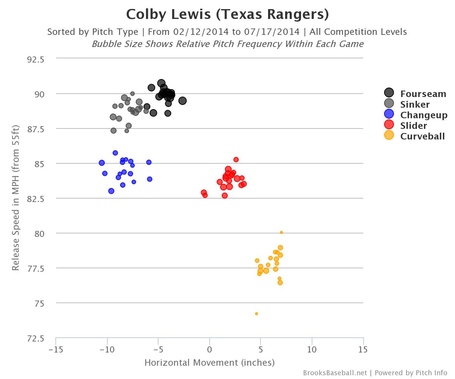 Find the link between Colby Lewis and the 1978 NL MVP.

I plan on beginning to post a reliever usage chart next week, but I'm out of town this weekend and won't be able to update the chart for today's game.