The second half of this mid-week two-game set with the Brewers kicks off today at 12:37 as Wily Peralta takes on J.A. Happ. The Dominican right-hander has been the Brewers second-best starter this year (behind Kyle Lohse) and looks to build on the great start to his second full season with Milwaukee. With a 3.20 ERA Peralta doesn't blow anyone away, but the ground-ball pitcher had been consistently putting in solid performances up until about mid-May. Since then, Peralta's ERA has jumped from almost 2.00 to the aforementioned 3.20 mark and opposing teams are getting a lot more hits off the righty.

His pitches are pretty straightforward with a fastball, sinker and slider combination looking to induce weak contact and ground balls from hitters. His fastballs have some jump on them, regularly hitting mid to high-90's on the radar gun. Even his slider is 86 MPH, so obviously everything the Dominican throws comes fast and with movement. As you can see, there isn't a ton of difference between his fastball and sinker: 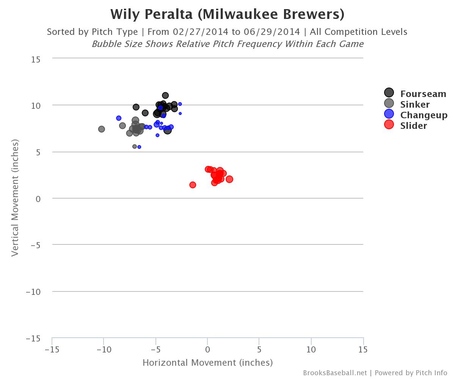 If his 53.2% GB-rate didn't convince you that Peralta is a ground ball pitcher then this should do it: 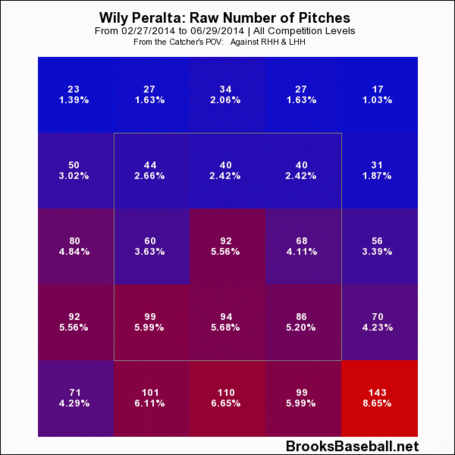