Thinking about Blue Jays roster moves? Here are some resources that could help

Share All sharing options for: Thinking about Blue Jays roster moves? Here are some resources that could help

On Monday, Sergio Santos was designated for assignment and placed on outright waivers and today, Ben Nicholson-Smith of Sportsnet reported that the reliever had been successfully outrighted to triple-A Buffalo. Why couldn’t Santos be simply sent down to the minors without being exposed to waivers? Is he out of options? What does "designated for assignment" mean?

The answers to these questions can be found in the Bluebird Banter Library. You don’t have to go anywhere to visit this library—you don’t even need to have a library card—it’s conveniently accessible through the navigation bar above (or by clicking the icon with the three horizontal bars on a mobile browser) or by bookmarking the links below. 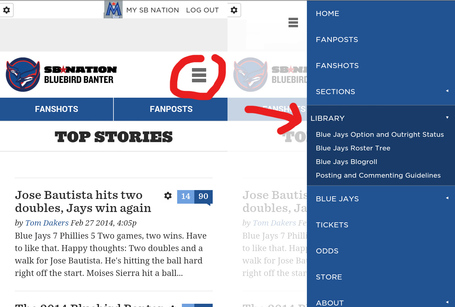 Primer on Transactions: Options and Outrights by MjwW

Major League Baseball’s transaction rules are a complex lot to understand, but we have tried to boil down a selection the most common rules down to an easy-to-digest primer. In there you can find out what it means to get "DFAed", how many "options" a player gets in his career, and how some veterans can simply refuse to be sent down to the minors, even after being DFAed.

When looking at the Blue Jays and thinking about which players can be sent down to the minors and which cannot, the this is a great resource. The table there shows whether a player has options remaining, and whether he can be outrighted to the minors without his consent. The list includes everyone currently on the 40-man roster as well as a list of most of the other players in the organization that had previously been on the 40-man roster at some point in their career.

This is a graphical representation of how each member of the current 40-man roster arrived on the team. Players who came over via a trade, or were drafted as a compensation pick for a departing free agent (or unsigned draft pick from a previous draft), are linked to the players they were traded for or the player that gave the Blue Jays the supplementary round pick.