The Blue Jays look to take 3 out of 4 from the Red Sox at 12:37pm this afternoon as Marcus Stroman goes up against Rubby De La Rosa. The Dominican right-hander has pitched well for Boston this year but was optioned down to Pawtucket back in June to make way for Jake Peavy, even though De La Rosa had pitched better so far this year. He was then recalled earlier this month and picked up where he left off before the demotion. Overall, the righty has a 2.64 ERA and a 3.84 FIP in seven starts this season including a pair of seven inning shutouts.

De La Rosa's repertoire is pretty weird for a righty starter, with the majority of his pitches being fastballs and changeups. Less than 14% of his pitches are sliders, meaning he attacks hitters on both sides of the plate with just his mid-90's fastball and his solid changeup. His pitch selection seems to scream reliever who only has to face batters once, but he's made it work so far this season in a starting role. There is a chance his pitch mix has changed for the better since his promotion back to the Red Sox earlier this month as he's now featuring the slider much more frequently: 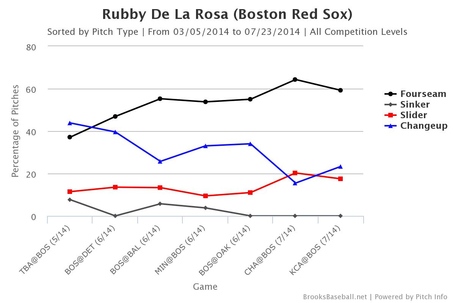 Even weirder is that De La Rosa throws his changeup right down the pipe against righties, which is normally a bad idea: 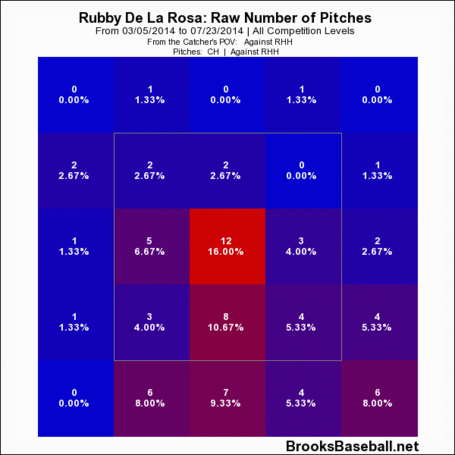 Find the link between Rubby De La Rosa and the player who shares his number with the famous general manager of the NHL team in his MLB team's city. (Confused yet? Good luck)