The Blue Jays attempt to snap their 17-game losing streak at Yankee Stadium this afternoon as Drew Hutchison takes on Chris Capuano. The lefty Capuano made the Red Sox out of spring training and appeared in 28 games out of the bullpen before being released and picked up by the Rockies. Then on Thursday the Yankees sent cash to Colorado for the pitcher, who slides right into the starting rotation showing just how banged up New York currently is. In his 31.2 innings in Boston, Capuano had a 4.55 ERA with an ugly 10.5 BB%.

Capuano throws the main four pitches in a fastball (sinker), curveball, slider, and changeup, with the 35-year-old's hard stuff still sitting in the low-90's. Against same-handed hitters the southpaw mainly just throws a fastball and slider, while he's heavily fastball and changeup against right-handed batters. A fun thing to note is that Capuano has thrown 41 curveballs this season and has not got a single batter to whiff on one. I'm not sure that's how curveballs are supposed to work Chris. 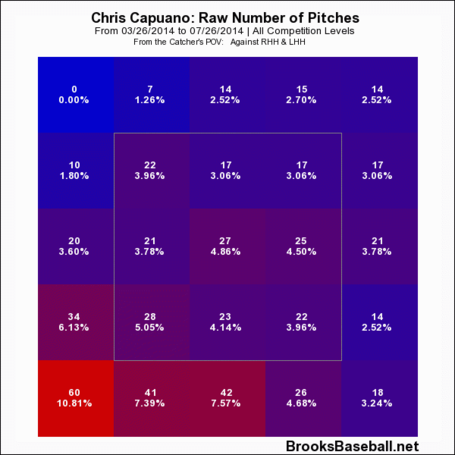 It looks like Todd Redmond is unavailable today for the Blue Jays, while Dellin Betances and David Robertson likely won't be available for the Yankees.

It's becoming clear why the Yankees are happy to start a southpaw they just acquired against this Blue Jays roster.

Find the link between Chris Capuano and the 2005-2006 NCAAB player of the year.