The much talked about Yankee Stadium losing streak for the Blue Jays came to an end at 17 games this afternoon, as Dan Johnson and some sloppy New York defense powered Toronto to a 6-4 win. Drew Hutchison was pretty solid allowing only two runs and should quiet talk of him possibly being moved out of the rotation.

The game started with a little bit of funny business in the first inning after Jose Bautista was plunked by Chris Capuano after hitting two home runs last night. Then in the bottom half, another home run hitter from Friday in Carlos Beltran was plunked by Drew Hutchison which led to warnings being handed out by home plate umpire Alan Porter. Gregg Zaun went on to say that the HBP from Hutchison was CLEARLY unintentional, BUT he would love to see Drew do more of those types of things (which makes no sense at all). At this point I could hardly handle the drivel coming out of my TV and decided to mute it for the remainder of the game.

Regardless of the warnings, the umpiring was pretty bad all day with a checked swing by Jose Reyes in the first at-bat of the game being called a third strike without even an appeal to first base. There was also this low strike call to Melky Cabrera that got the Blue Jays dugout all riled up: 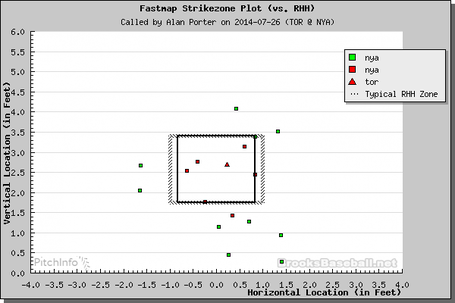 Luckily it went both ways this afternoon as a Dan Johnson at-bat looked like this in the top of the fourth (red for strikes, green for balls): 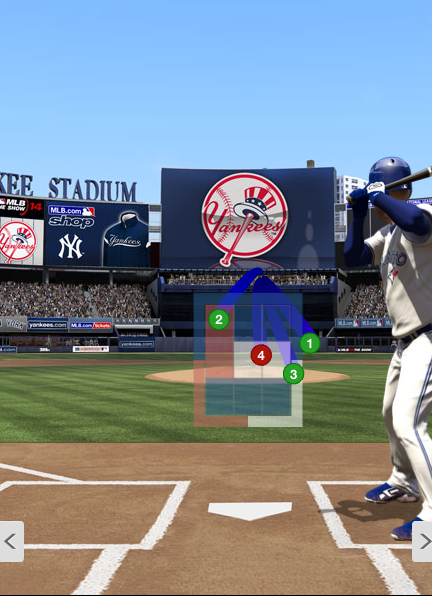 The initial innings went along fairly smoothly aside from the plunkings until the fourth when Jacoby Ellsbury saved an extra-base hit by Colby Rasmus with a tremendous play in center field. Then in the bottom half, Brian McCann smashed a two-run homer to center field that opened the scoring. The home run came on a elevated changeup, which Hutchison seemed to be throwing a lot more than the usual 12.54% rate so far this season.

The Blue Jays got both runs back in the fifth after a Melky Cabrera double down the left field line scored Jose Reyes all the way from first on an aggressive call by Luis Rivera to send the speedy shortstop home. This was shortly followed by a Steve Tolleson sacrifice fly to center field that scored Cabrera. In the sixth, Drew Hutchison hit Francisco Cervelli after the Yankees catcher didn't react to the ball flying towards his arm at 90mph. Thankfully Alan Porter realized this and didn't eject Hutchison much to the chagrin of Joe Girardi and company.

After Shawn Kelley relieved Chris Capuano in the seventh, the Blue Jays loaded the bases which was helped by Brian McCann playing first base like a dingus not deciding whether he wanted to throw home, touch first base, or throw to second. That resulted in all runners being safe and lefty Matt Thornton coming into the game in an attempt to clean up Kelley's mess against Dan Johnson and the rest of the lefty-heavy bottom half of the Blue Jays lineup. Johnson proceeded to get jammed and squib it to second baseman Brian Roberts who did his best indecisive McCann impersonation (while also being kicked by McCann for good measure) allowing all the baserunners to once again advance safely, scoring Melky Cabrera. A Rasmus strikeout and Goins groundout limited the damage, but the Blue Jays still took the lead 3-2.

Aaron Loup came on to get the final out of the seventh inning for the Blue Jays and proceeded to stay in the game for the eighth as well. After some tough calls led to two straight walks, the southpaw got out of the inning on this close strikeout call to Brett Gardner that no one in Yankee Stadium appreciated very much: 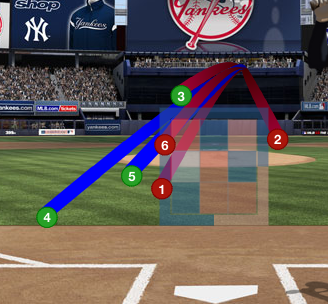 The Blue Jays got some serious insurance in the ninth when Dan Johnson slugged a three-run homer to the short porch in right field off CANADIAN Jeff Francis. I'm sure if the Yankee fans hadn't started leaving before the homer even got to the seats they would still be chanting "USA USA USA"  despite how idiotic it is.

Casey Janssen entered the game in the ninth without a chance for the save, but still with the opportunity to crack another ugly trend aside from the Yankee Stadium losing streak:

That streak didn't snap as Janssen gave up a big two-run home run to Carlos Beltran because OBVIOUSLY he didn't have the same intensity in a non-save situation. Other than the homer it was a clean ninth inning and the Blue Jays finally snapped the annoying 17-game Yankee Stadium losing streak.

To sum up some of the noteworthy performances:

Tomorrow sees the rubber match of the series get underway at 1:05 as J.A. Happ gets the start against rookie Shane Greene. The Blue Jays are undefeated at Yankee Stadium in the past one game, so let's see if they can keep the streak going tomorrow.