After a 5-4 victory this afternoon capped a series victory against New York, it seems unlikely that the Yankee Stadium losing streak will have to be talked about ever again this season. A back and forth affair came down to the ninth inning where Dioner Navarro drove in Jose Bautista against Yankees closer David Robertson, while Casey Janssen closed out the game in the bottom half.

The scoring got started early in the afternoon in the first inning with Bautista displaying some nice situational hitting by chopping it to the right side of the infield to score Jose Reyes from third. The Blue Jays almost added another run in the fourth inning when third baseman Munenori Kawasaki singled to right field, but Dan Johnson was gunned out at home by right fielder Zelous "is jealous I'm not Zack" Wheeler.

The scoreline finally changed in the fifth inning when Juan Francisco smashed a Shane Greene slider deep into the right field seats to make it 2-0 Toronto. The lead was quickly erased in the bottom half though, as Chase Headley and Francisco Cervelli went back-to-back on two fastballs off of starter J.A. Happ.

Toronto took the lead once again in the next inning as Colby Rasmus doubled home Dan Johnson, which chased Yankee starter Shane Greene from the game. The bottom half saw the lead relinquished once again as Brett Cecil allowed an inherited runner in Jacoby Ellsbury to come home on a Brian McCann single hit into the shift. Munenori Kawasaki, playing shallow right field, got the throw off in time but Jose Bautista was unable to collect it on the short hop at first base.

A big opportunity presented itself in the seventh inning as the Blue Jays loaded the bases with Dioner Navarro stepping up to the plate. Unfortunately Brian McCann was much more decisive today than yesterday and properly fielded a grounder at first base and got the ball home for a force out. With the bases still loaded Dan Johnson then had a chance to repeat his heroics from Saturday afternoon, but didn't.

The Sanchize came on to pitch the home half of the seventh and got three straight groundouts, mixing in 98 mph fastballs with knee-buckling curveballs. The Blue Jays ONCE AGAIN took the lead in the eighth as a brutal pickoff attempt at first base by Dellin Betances advanced Colby Rasmus all the way to third. A Kawasaki sac fly made it 4-3 Blue Jays with Aaron Sanchez once again coming out for the bottom of the eighth.

Unfortunately it is possible to get a hit off the highly-touted right-hander, as Brett Gardner singled off a 97 mph heater. A sac bunt that just oozed class by the GOAT Derek Jeter advanced Gardner to second where he was eventually driven home by Carlos Beltran. Sanchez was kind of up in the zone all day, but it was still a fairly impressive outing: 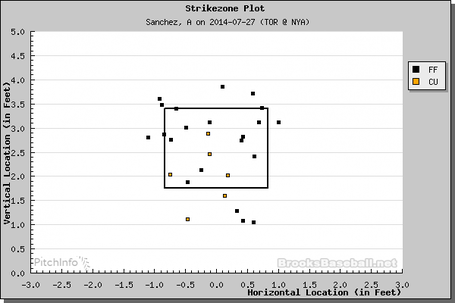 The series victory was on the line as the teams went to the ninth inning locked at 4-4. Joe Girardi decided to not be a slave to the save and tossed out David Robertson to face the meat of the Blue Jays lineup. A Melky Cabrera single quickly led to a force out at second base on a Jose Bautsita grounder thanks to a great play by Chase Headley. It turned out to be a blessing in disguise though, as Bautista timed Robertson's high leg kick to perfection and stole second base without a throw. Dioner Navarro then came through in the clutch and looped a Robertson cutter to right field that easily scored Bautista.

Thankfully the bottom of the ninth was free of excessive sweating as Casey Janssen sat down three straight Yankees to collect his 16th save of the season. The victory locked up the third straight series win for the Blue Jays and pushed the team to 7-3 in their last 10 games. Aaron Sanchez also picked up his first major league win, which is exciting if you're into those types of things.

Players of note today include:

This graph really shows how many times the Blue Jays tried to hand this game back to the Yankees (extra touch thanks to Minor Leaguer): 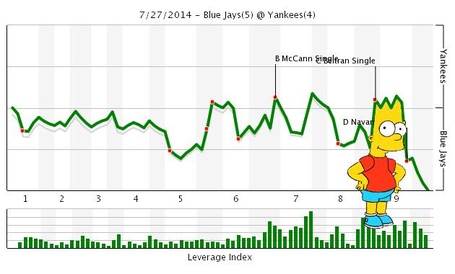 The Blue Jays will now fly to Boston for a three-game midweek set with the Red Sox at Fenway Park. The probables for tomorrow are R.A. Dickey and Clay Buchholz, while Marcus Stroman is set to take on Rubby De La Rosa on Tuesday evening. SERIES WINS! YANKEE STADIUM STREAK SNAPPED! SECOND PLACE! BASEBALL!