So with the series being over, i figured we could recap the home runs hit in it, to see what were impressive, what were thanks to the stadium, and just other cool facts about them. I'll be going through each home run individually. The red dots you will see is the path of the ball, blue is where it landed, and green is "true" distance.Let's start... NOW!!!!

1. Jose Bautista: #19 1st inning off of Hiroki Kuroda. This was a no doubter. It was leaving the park from the second his hands exploded through the zone after that beautiful leg kick. This was on a 91 mph 3-0 sinker, and was obviously a mistake by either Kuroda for missing his spot (not getting it in enough) or Cervelli and Girardi for calling it. This ball traveled a "true" distance of 397 feet, and a stated distance of 395 feet. After leaving the bat a 101 mph and climbing to an apex of 101 feet, this ball cleared the left field fence, and would have been gone in all thirty parks. 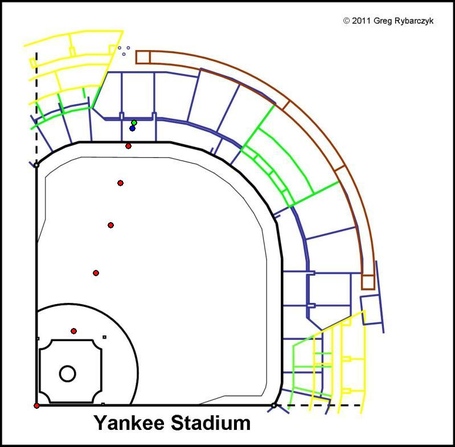 2. Jose Bautista: #20 3rd inning off of Hiroki Kuroda. Not nearly as comfortable of a home run, although if all you saw was his swing, you'd think it'd be gone. With a total distance of 364 feet, and a true distance of 362 (never seen that be lower before), this home run squeaked over the corner of the left field line. With an initial speed of 99 mph, and an apex of 74 feet, this 2-1 Kuroda 82 mph slider was not as powerful of a hit, but still pretty smashed. This solo home run would have been gone in 21 of the thirty parks. 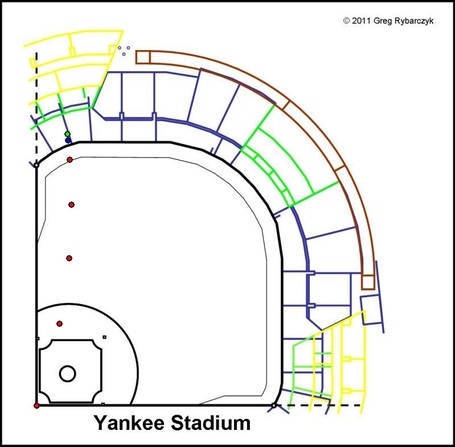 3. Carlos Beltran: #11 3rd inning off of Mark Buehrle. This ball was absolutly crushed. with a distance of 401 feet and true distance of 403, beltran smacked a 2-1 78 mph changeup over the left field regular porch for a solo trot around the bases. With an off the bat speed of 102 and an apex of 101, this would be a homerun in all thirty parks. 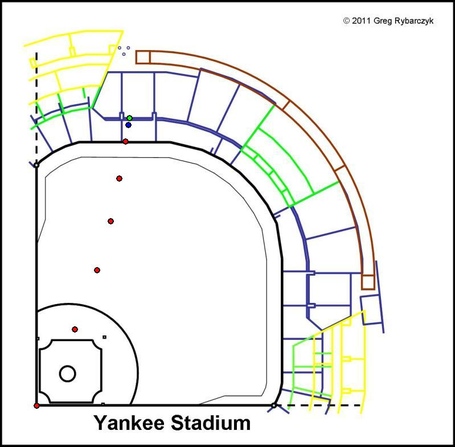 4. Ichiro Suzuki: #1 3rd inning off of Mark Buehrle. Oh how i deeply hated this home run. Ichiro was able to hit his first home run, a three run shot, of the year off a 1-1 72 mph curveball without the curve. He slapped this one 356 feet, with a 355 true distance (again, I don't know why smaller, just the facts). WIth an off bat speed of 98 feet and an apex of a mere 62 feet, this is a linedrive or fly out in 29 of thirty parks. Unfortunately, yankee stadium is not of of those. 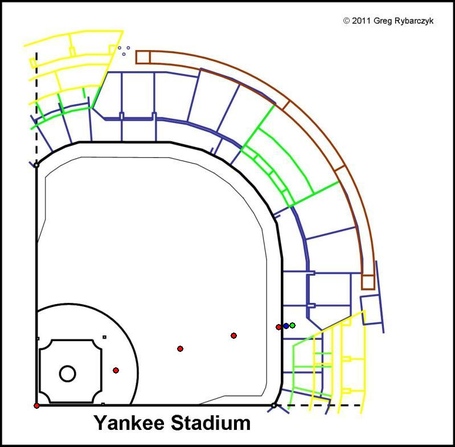 1. Brian McCan't: #11 4th inning off of Drew Hutchinson. There were three homr runs in this game, and Brian decided to start the tee-ing off in the 4th. This Hutchinson 1-1 83 mph change up obviously didn't change eough, as McCan't clobbered it 406 feet, with a true distance of 407. Big deal 1 more foot wow crazy. Although the speed off the bat was 104 mph, the apex of this leather sphere's flight was 72 feet, and because of this, it only would have made it out in 22 parks, despite going over 400 feet. This bullpen shot was no problem for our jays however. 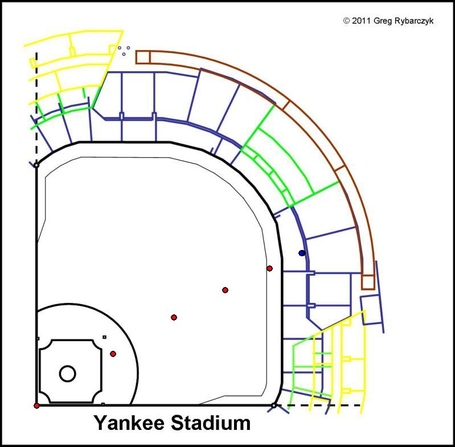 2. Dan Johnson: #1 9th inning off of Jeff Francis. Apparently the yankees didn't get the memo. Everyone walks Dan Johnson. Why? because he can hit absolutely monster home runs, not even needing the short porch. This baby cleared the right field fence by going 352 feet, with a true distance of a massive 353 feet. With an off the bat speed of 102 mph, and a towering apex of 52 feet, this three run smash would've made it out in a whole 5 parks! But seriously, thank GOD someone finally used the short porch to their advantage. And thanks for securing our streak snapping win Dan. Also, good job being able to hit that devastating 2-1 Jeff Francis 81 mph slider. Touch em all Dan, you'll never hit a bigger home run in your life! 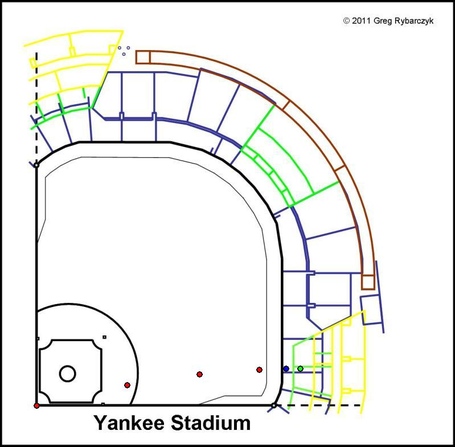 3. Ugh not another Carlos Beltran: #12 9th inning off of Casey Janssen. This was not near the power of his first home run in the series. This one went 377, with a true distance of 381. This 1-0 89 mph 4-seam had an off the bat speed of 97 mph, and an apex of 87. It would've cleared the fence in 1 park. Woo Bud Selig for letting the yanks replicate the old stadium. But, in the words of JoJo, this 2 run homerun was "too little too late".

Too Little Too Late- JoJo 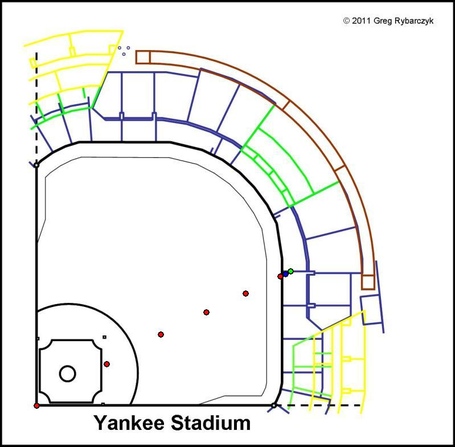 1. Juan Francisco: #16 5th inning off of Shane Green. The first home run of the day was belted by Mr. Francisco. This ball went a total of 365 feet, with an actual distance of 371 feet. It wasn't one of those big 420 foot plus ones that he is capable of, but it would've been gone in all thirty parks. Juan sent back this 1-0 83 mph curveball with a 100 mph off the bat speed and an apex of 117 feet. 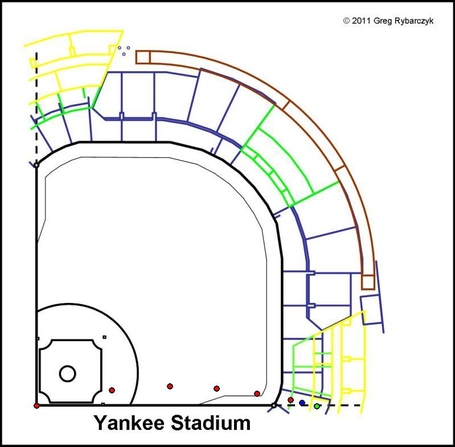 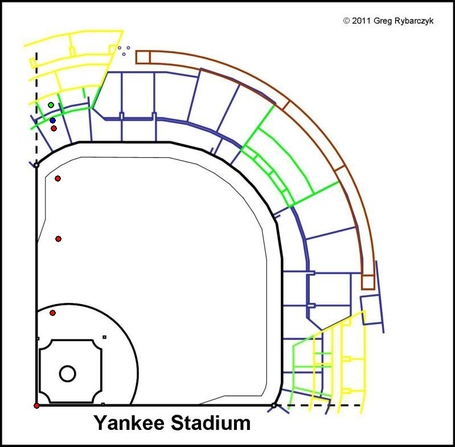 3. Francisco Cervelli: #1 5th inning off of J.A Happ. This is the last home run of the series, and first of the year for Franny C. It went 361 feet with a true distance of 369. With a off bat speed of 95 and an apex of 116, i could've sworn it was a regular fly ball off the bat. THere are also categories of impact with ratings of -5 to 5 depending on how much the factor helped or didn't. Well on this home run, the wind impact is 5, and the temperature impact is 3, meaning the 1-0 91 mph fastball got a TON of help. ESPN Home Run Tracker literally says that it is a home run in 0 parks. I guess if you hit the top of the wall in Yankee Stadium, it is officially the cheapest home run in baseball. Great job Cervelli. Also even if you haven't been clicking on the links to watch the video's, i suggest you do for this one. It is one of the funniest home run trots i've seen. It's clear he doesn't have lots of experience.

The Most Uncomfortable Home Run Trot 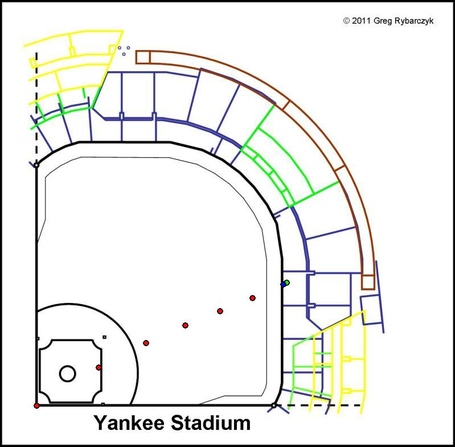 So we managed to win the series 2-1 after losing the first one. In total their were 4 Jay longballs, and 6 for the Yanks. This is good because it means we weren't home run reliant and were able to manufacture runs. So, for my thoughts on the series, i leave you with the lyrical geniuses that are DJ Khaled, Ludacris, Rick Ross, Snoop Dogg and T-Pain.

Warning: they use a few bad words cause that makes them cool obviously All I Do is Win