Surprising yet not surprising: the Blue Jays have chosen reliever Rob Rasmussen as the man to come off the 25-man roster to make room for the newest Jay, Danny Valencia. Rasmussen has been optioned to triple-A Buffalo, leaving Toronto with a six-man bullpen, at least temporarily. We learned this news from pretty much everyone on the beat so I'll choose to quote...(spins big wheel)... Scott MacArthur:

Some readers in the comments of yesterday's trade article mentioned that Rasmussen would probably be the one to go (kudos to RangerMan68. Considering that Rasmussen was the only reliever to pitch last night, going down to six relief pitchers isn't that risky of a move. I was barely awake by the time he took the mound but I did remember that his control wasn't all there at points. So even though going down to six relievers is a surprise, it really wasn't all that surprising. Should Marcus Stroman fail to go deep or should the game go long, someone like a Chad Jenkins (who just passed the 10-day minimum for optional assignments) could come up for an infielder with options. And who knows who would be on the roster by the time the Blue Jays need a seventh man in the bullpen.

According to the 40-man roster on BlueJays.com, Danny Valencia has been assigned #15--I assume he didn't even bother to ask Jose Bautista whether he could take over #19. Notable Blue Jays who have worn #15 include Shawn Green and Lloyd Moseby. It has also been worn by Tom's favourite outfielder, Fred Lewis, coach Gene Tenace, as well as television personalities Pat Tabler and Kevin Millar. Also, the latest edition of the Roster Tree Route Map is out, with a new configuration of the pink line (click to enlarge): 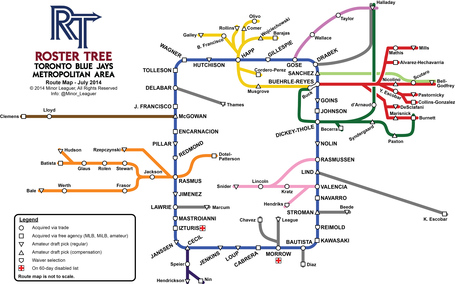 On an unrelated, personal note, it is very sad to hear about the layoffs that happened today at theScore. They had a really good thing going there for a while, hiring and developing a lot of great, young sportswriting talent right here in Canada. It is sad that feature writing just isn't that profitable.