A four-game weekend series in the dump that is O.co Coliseum gets underway this evening at 9:05pm EST as Oakland looks to get some revenge after Toronto swept them at the Rogers Centre back in May. A great pitching match-up tonight sees R.A. Dickey take on stud right-hander Sonny Gray in a battle of old (39) vs. young (24). Gray was drafted 18th in the 2011 draft out of Vanderbilt and moved pretty quickly through Oakland's minor league system to become one of the top pitchers on the big league team. In terms of the Athletics as a whole, they were just swept in Detroit and will be looking to get back on track this weekend.

Gray mainly throws a fastball and curveball as well as a changeup to both left and right-handed hitters. His curve is one of the best in the game and falls of the table right at the last second:

If Gray is ahead in the count or has two strikes, it's a good possibility that the curveball is coming, but it matters little. This year hitters have only managed 23 hits off of the hook (.184 average) and not a single home run has been hit off of the pitch meaning he rarely makes a mistake with it. Unlike the GIF above, most Sonny Gray curveballs end up low and outside of the zone: 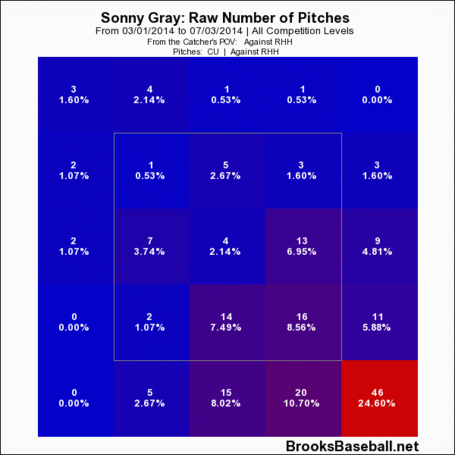 Find the link between Sonny Gray and the Washington Nationals player with the uniform number one higher than Gray.