The final game of the series gets underway tonight with the chance for the Blue Jays to sweep away the lowly Red Sox and improve their record to 9-3 after the All-Star break. Mark Buehrle starts for Toronto against someone who is definitely not Jon Lester, meaning the Red Sox dugout will be on #hugwatch during tonight's contest. The actual pitcher going to the mound for Boston is 25-year-old right hander Brandon Workman who started the year with the team as a reliever. After being optioned to AAA for a month, he came back up and was stretched out as a starter, which is a role he really hasn't done too poorly in. He had a bad start on July 2nd against the Cubs that makes his numbers appear worse than he's really been for the rest of his appearances in the rotation.

Workman mainly throws a fastball, cutter, and curveball with the curve being the pitch he heavily relies on to get hitters out. Staying true to his last name, the Texan mainly just eats innings without doing anything too flashy which is good enough for the situation the Red Sox are currently in. His curveball has some serious drop to it though, as it falls off the table and goes right through the floor into the basement: 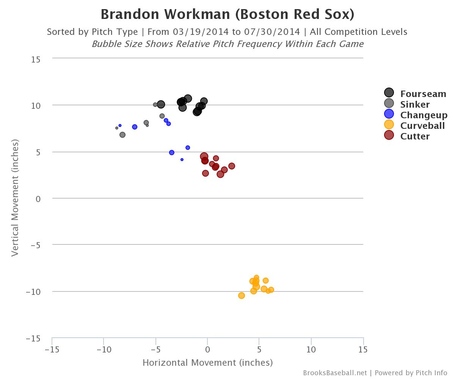 Brandon Workman is pretty split-neutral, but he does have a tendency to give up the long ball to right field:

Find the link between Brandon Workman and the San Francisco Giants player named after the object that keeps pants from falling down.