UPDATE- Jarred Cosart has been traded to the Miami Marlins. Right-hander Jake Buchanan will start for the Astros tonight.

With all the excitement of the trade deadline this afternoon, it's easy to forget that there's also a Blue Jays game tonight. At this point it looks like Jarred Cosart will not be traded away from the Astros and will start against Toronto this evening at Minute Maid Park. The righty will go up against Drew Hutchison, who had a solid start against the Yankees last time out. The Astros currently sit at 44-64 and are once again heading towards a very high pick in next June's entry draft, although division rival Texas is even lower in the standings right now.

If you were a team interested in acquiring a young arm then Cosart would be a good guy to take a look at. The hard-throwing righty will have slightly over one year of service time after this year, meaning he won't reach arbitration until 2017 and won't become a free agent until 2020.

The 24-year-old is from Texas and was drafted by the Phillies in the 38th round due to a hard college commitment, but signed for a rather large bonus. He made his way down to Houston in the Hunter Pence deal that also landed Jonathan Singleton, which has turned out pretty well for the Astros. Cosart mainly throws a cutter and a curveball, which is a repertoire you'd expect to see coming out of the bullpen rather than in a starting rotation. Cosart has a big hook, similar to the one that Brandon Workman was throwing yesterday: 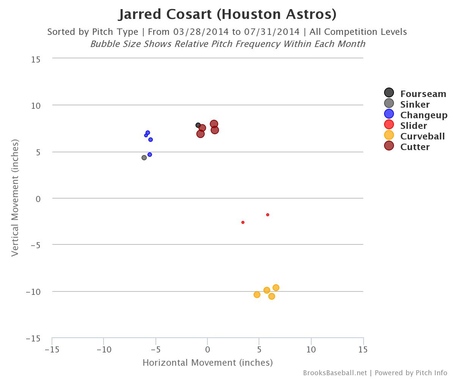 Against right-handed hitters this season, Cosart has thrown his cutter 65% of the time and has tried to run it off the plate similar to a slider: 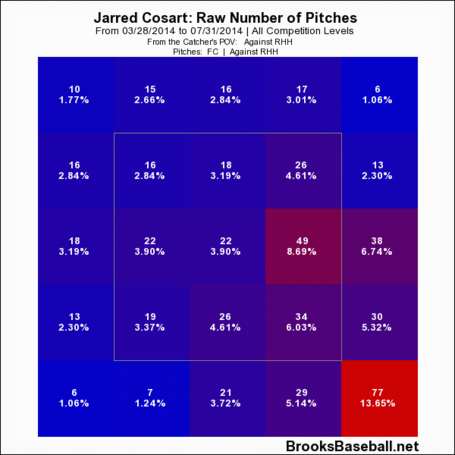 Cosart has reverse splits in the small sample size of his career, getting hit much harder by right-handers.

Find the link between Jarred Cosart and the Rays starter who is the biggest trade chip still left on the market.