After the mess of last night's game, the Blue Jays don't have to wait long to get a chance at redemption as today's game gets underway at 4:00pm EST. Lefty Tommy Milone gets the ball for Oakland against rookie Marcus Stroman in the Independence Day matinee. Milone is a 27-year-old Californian who didn't get any serious action in the major leagues until 2012, meaning he's still in his pre-arbitration years. He came over from the Washington Nationals in the Gio Gonzalez trade and has held his own on the West Coast. He has no eye-popping peripherals, but he's gotten the job done well enough for three straight seasons.

As mentioned in our "View from the other side", Milone is pretty much the usual soft-tossing lefty with great command and a good changeup. His fastball sits about 88 mph as well as possessing heaters of the sinker and cutter variety. There's also a curveball thrown in there every once in a while, which is used a lot of the time as a first pitch to left-handed hitters. Assuming the Blue Jays stack their lineup with right-handed hitters though, there's going to be a lot of fastballs and changeups this afternoon. You can see that the change closely resembles his sinker in terms of movement: 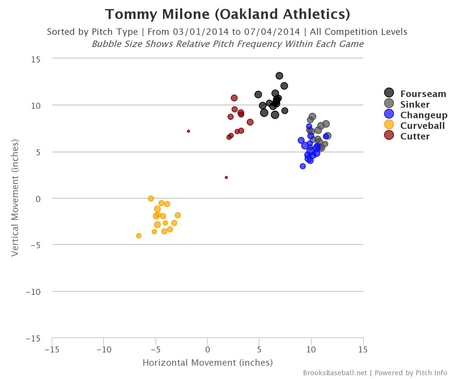 Lefties actually hit Milone better thanks to his changeup being so nasty on right-handers, but the splits aren't too severe.

Find the two links between Tommy Milone and the 2007 Rose Bowl MVP.