The first two midseason Top 50 prospect lists were released this morning at Baseball Prospectus and Baseball America with three Blue Jays landing on at least one of them. The players appearing on these 2014 lists may not have been the ones you would have expected to appear if you predicted them a year ago. The only player in both lists is a slight surprise, with lefty Daniel Norris getting the #33 ranking on the BP list and the #25 spot on the BA Top 50. Both places speak highly of the Tennessee native:

Norris took a developmental step forward in 2013 and has built upon that through the first half of this summer. He is now consistently tapping into the front-end stuff he’d always teased, and that growth in consistency has catapulted him up the prospect rankings. After stymying Florida State League bats over 13 starts, he has continued his dominance through his first three Double-A outings and is showing no signs of slowing. –Nick Faleris (Baseball Prospectus)

As BP mentioned, Norris has made the step up to AA pretty seamlessly and currently has 25 strikeouts in 16.1 innings, including this one:

The other player who appeared on the BP Top 50 is longtime top prospect Aaron Sanchez who slotted in ahead of Norris at #29. It certainly seems that the guys at Baseball Prospectus are still high on the righty despite command and delivery issues:

It’s been a familiar tune for the right-handed starter this season: electric overall stuff clouded by concerns as to whether the fastball command is going to grow enough to lead to consistency at the highest level. Sanchez has moved a few spots, but given graduations to The Show his status has probably moved a bit backward. This arm tends to tease visions of a legit frontline arm with his stuff, but the clear-headed line of sight points to a mid-rotational starter. –Chris Mellen

This ranking puts him ahead of fellow right-handed pitchers like A.J. Cole, Mark Appel, and Jose Berrios, which is a little surprising. Sanchez has made five starts in AAA Buffalo this season and has a 12.8 BB%, which is a slight issue. You can witness the good curveball and fastball in the following video, but you can also see the poor command on the 2-2 pitch:

The Blue Jay that joins Norris on the BA Top 50 is Mississauga's own Dalton Pompey, who just cracks the list at #47. Everyone's favourite breakout prospect is beginning to get some serious attention in the minors and is now attempting to take his game to the next level with his promotion to AA New Hampshire.

Toolsy center fielder’s bat has caught up to rest of his tools in a breakout start in the Florida State League.

The switch hitter has struggled a bit in his first 9 games in the Eastern League, but the sample is still too small to get too worried about him. Before going up to New Hampshire he hit .319 and walked at an 11% clip, which is definitely exciting for an organization that lacks prospect depth on the position player side of things.

The lists both agreed on the #1 overall prospect, who is still Byron Buxton despite the fact that he's only played 6 games in Fort Myers this whole season. Soak in how athletic he looks though! 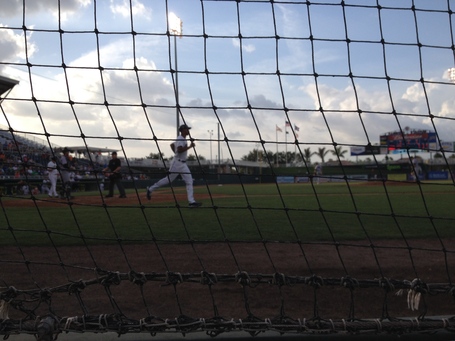 via an angry Scott C. who didn't get to see him play in Fort Myers.

Former Blue Jay Noah Syndergaard was placed highly on both lists, with BP putting him at #9 and BA slotting him in at #19, despite Las Vegas and the PCL giving him quite the rough time. Many of these players will be seen in the Futures Game this coming Sunday including both Blue Jays who were on the BA list in Dalton Pompey and Daniel Norris.