How about this last week in Blue Jays land eh? Not too much fun to be had on the major league side of things. Veteran R.A. Dickey goes for Toronto tonight attempting to stop the losing streak, while soon-to-be 23-year-old Tyler Skaggs heads out to the mound for the Angels. Skaggs faced the Blue Jays back on May 10th and pitched into the ninth inning allowing only four hits and three runs (two of them were surrendered by the bullpen after he left the game).

The lefty's season has been up and down since that start and included a recent month-long DL stint for a strained right hamstring, which he only returned from on July 2nd. When healthy, Skaggs has been the Angels' third-best starter behind "Final Vote" candidate Garrett Richards and last night's pitcher in Jared Weaver. It's tough to say if this fairly weak rotation will be able to even contend down the stretch with the A's in the American League West, but they're going to need Skaggs to be wheeling and dealing to have any chance at all.

As mentioned in the preview from May, Skaggs is mainly a fastball and curveball pitcher with a changeup for right-handed hitters as well. Unfortunately for the California native (one of four Angels starting pitchers from The Golden State) his fastball is slowly losing velocity, which has to a concern for a pitcher who relies so heavily on it: 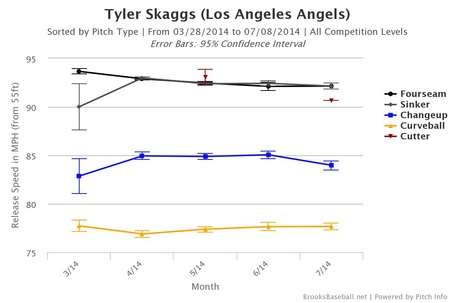 THIS IS GOING TO BE THE WORST LINEUP OF THE YEAR! I DON'T EVEN KNOW WHAT TO DO.

Find the link between Tyler Skaggs and Delta, British Columbia's rock band gift to the world.