Like Harry Houdini, He's Escaped Your Grasp: Are Fundamentals More Important than We Think?

A quick and dirty look at whether and how batter profile affects clutch score.

Share All sharing options for: Like Harry Houdini, He's Escaped Your Grasp: Are Fundamentals More Important than We Think?

Earlier this week, Nick wrote a nice piece that seemed to demonstrate that, at least on the offensive side, the Jays have performed most "fundamentals" (i.e. getting runners over, cashing runners with less than two out, etc.) at around league average rates. The fundamentals folks have long been the target of scorn from a lot of folks on the sabrmetric side -- and often rightly so. But Nick's article made me consider why the relative importance of fundamental baseball might be contextually dependent. Considering that the sabrmetric views started to cross over into the mainstream during one of the most explosive offensive era the game has ever seen it makes sense that fundamentals (typically associated with small ball) would be less valuable. Nowadays, of course, scoring has declined precipitously leaguewide, which ought to make those same fundamentals much more important.

Gregg Zaun, The Blue Jays, and the "Fundamentals" 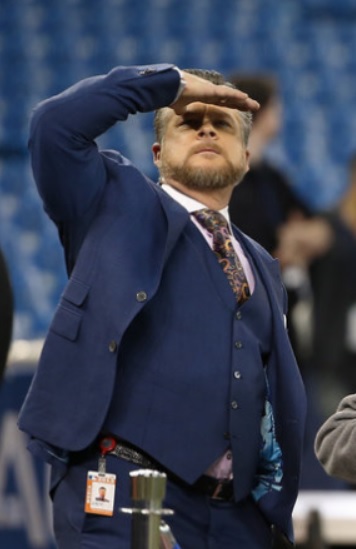 To hear Gregg Zaun spin it, it would appear that the Blue Jays are out to lunch when it comes to playing "fundamental baseball". With the team struggling it's an appealing narrative, but it's not a true one. -- Nick Ashbourne

This got me to thinking about what kinds of players are known for doing the fundamentals like those above and whether there was some way to distinguish fundamentals from overall being good at hitting in the statistical record. Figuring worse overall hitters might need to perform those fundamentals better, I decided use FanGraphs Clutch score as a proxy for fundamentals and used a sample including all players with 5000+ plate appearances between 2000 and 2014 (n = 116). Essentially FanGraphs Clutch score estimates how much players helped their teams specifically by excelling in clutch situations relative to how they performed overall. I looked at how FanGraphs Clutch score was correlated with a number of different possible explanatory factors in batter peripherals (K%, BB%, BABIP, ISO, and Spd). I will spare you all the details but, for simplicity's sake, I built a linear model without any interaction terms.

There were no significant effects of Spd (p = 0.63) or BABIP (0.62) on Clutch score so I removed them from the model. Overall, the new model was highly significant (F = 9.57, DF = 112, p MGL, pardon the sabr joke) to determine how much each of these factors contributes to the explanatory power of the overall model. Overall, the model explained around one-fifth of all variance in clutch score (see the R**2); around 10% of that variance was explained by ISO. K-rate accounted for around 7.5 % of total variance and BB-rate accounted for around 2.5% of variance. Now for some pretty pictures!

Scatterplot of Clutch Score vs. Spd Score (note that the trendline is included but is not significant) 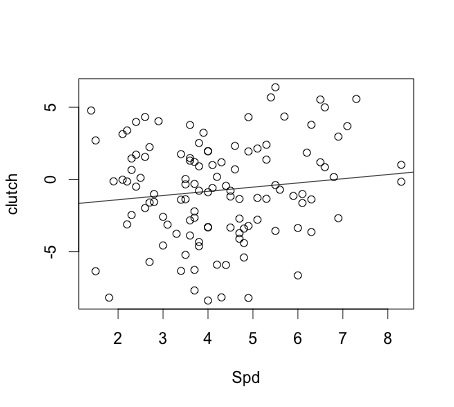 Scatterplot of Clutch Score vs. BABIP (note that the trendline is included but is not significant) 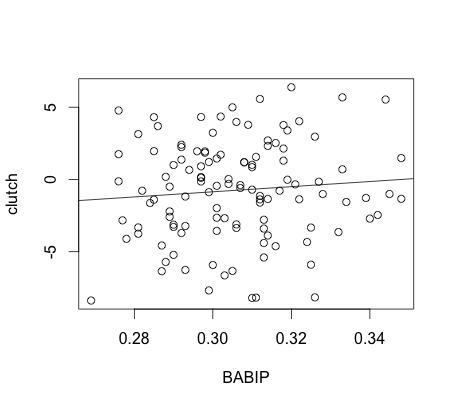 Scatterplot of Clutch Score vs. K-rate, expressed as a percentage of Plate Appearances (trendline is significant) 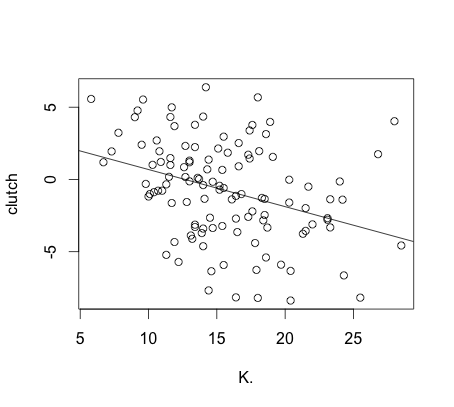 Scatterplot of Clutch Score vs. Isolated Power (trendline is significant) 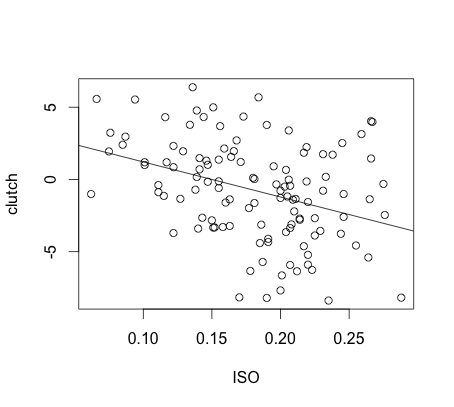 Scatterplot of Clutch Score vs. Walk-rate, expressed as a percentage of Plate Appearances (trendline is significant) 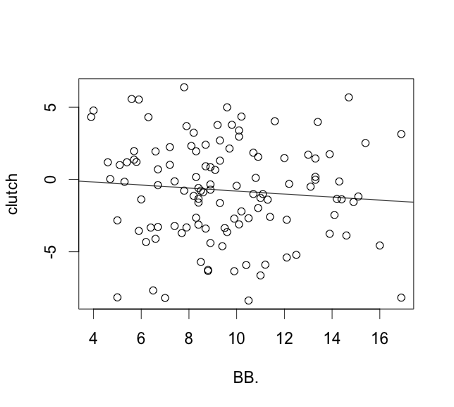 So, obviously there's a lot of noise here and using Clutch score doesn't really get specifically at fundamentals. Furthermore, there is an element of survivorship bias as weaker hitters (i.e., those with less power and higher k-rates) may not have reached 5000+ plate appearances unless they performed well in the clutch. Nonetheless, I do think it's intriguing to see these results -- particularly the significant negative relationship between walk-rate and clutch score. To put these results Into terms of how much these numbers impact actual win expectancies, I'll close with Juan Pierre, as much of a low-strikeout, low-walk, low-power hitter I can think of at the moment. Over 8280 plate appearances, Juan Pierre has hit to the tune of a wRC+ of 85. Juan Pierre's career WPA is -0.74.