It's a getaway day in Anaheim as the Blue Jays take on the Angels at 3:35 pm in the third and final game of this midweek series. Quite the pitching matchup is in store for fans who are near a TV during the day and aren't interested in that slightly important soccer match on at the same time. Marcus Stroman goes for Toronto while the Angels counter with Mr. Shampoo C.J. Wilson. The third Californian to start against the Jays this series also faced them on May 12th, getting touched up for five earned runs (on two homers) in only six innings, although he also struck out eight. Wilson has been a bit of a horse this year for the Angels, throwing 100+ pitches in 14 of 18 starts (good enough for the twelfth most pitches thrown in the league).

Things aren't all sunshines and roses for the lefty though, who had a 3.05 ERA entering June and now sits at a 4.23 mark. It hasn't been bad luck that has caused the downturn either as his FIP is exactly the same as his ERA so it remains to be seen if he can turn it around in the second half of the season. In Wilson's May 12th start against Toronto he threw a myriad of pitches as he usually does, with three types of fastballs and three types of off-speed pitches all making appearances: 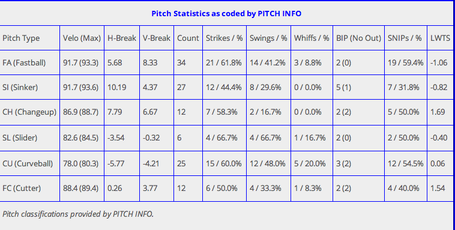 Wilson's curveball has been pretty bad this year (.320 batting average against), so if the Blue Jays want to isolate one off-speed pitch to attack that would be the one.

Find the link between C.J. Wilson and the 2010 AP NFL Defensive Player of the Year.