Fans are often hoping that Juan Francisco won't strikeout, but when really falls behind in the count, hoping may not be worth your time anymore.

Share All sharing options for: Hope, Logic, and Juan Francisco

In many ways baseball is a game of blind faith.

The most pertinent recent example is the way that Blue Jays fans, and apparently Jose Bautista, hoped the Jays would make major additions at the non-waiver trade deadline despite fairly solid evidence that wasn't going to happen. More generally fans of any batter are always hoping he'll get a hit every at-bat despite the fact even the best hitters make outs the vast majority of the time.

When the bottom of the ninth rolls around and the Blue Jays are down by a run or two, it's impossible not to think they are right in it, even if the chances of victory are slim. If being a fan meant giving up whenever the odds were stacked against your team it wouldn't be much fun. It's hard to imagine the entire Rogers Centre emptying out if the Jays fell behind 2-0 in the top of the first, even though the Jays win expectancy falls to just under 38 percent in that situation.

Seeing the improbable is part of the joy of watching sports. In some hypothetical time travelling situation where Ryan Goins, playing through a wrist injury, goes up against Randy Johnson in his prime, there is still a chance Goins hits a towering home run to shock the world. One of the best aspects of baseball, in my view, is watching unlikely heroes emerge and unlikely events transpire.

Thinking about hope and baseball made me wonder if there is a situation where the logical left brain just takes over and tells you that it's just not going to happen for your team. Everyone probably has a different threshold on this point. Although I can be a soulless and calculating robot at times, there is almost no situation where I can completely give up on the Jays. That's a character flaw on my part, but to be fair being a devoted sports fan is probably a character flaw of sorts to begin with.

In order to help remedy that flaw I attempted to find a situation with the Jays when hope just shouldn't be in the cards. The answer came fairly quickly: Juan Francisco in an 0-2 count.

Francisco is arguably known for his career strikeout rate of 34.5% more than anything else. Sure, he has impressive power, but when you picture the 27-year-old slugger, an image of him swinging through a breaking ball probably comes to mind first. His severe whiffing tendencies made me wonder how bad things get when Francisco gets as far behind in the count as you can get.

The results are pretty astounding. Through an 0-2 count this is what Francisco has done:

To be entirely fair, hitters don't tend to do well through 0-2, but this is something else. The negative wRC+ really sells it.

It should not be surprising that Francisco's big issue is striking out here. The following Brooks Baseball Zone Profile shows how often the big third baseman whiffs when he reaches 0-2 (Pro Tip: Ignore the strike zone and look beneath it): 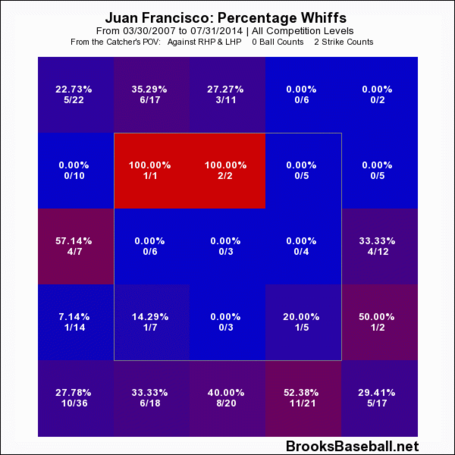 The main reason why he's whiffing so much is that he's swinging for terrible pitches when he gets behind: 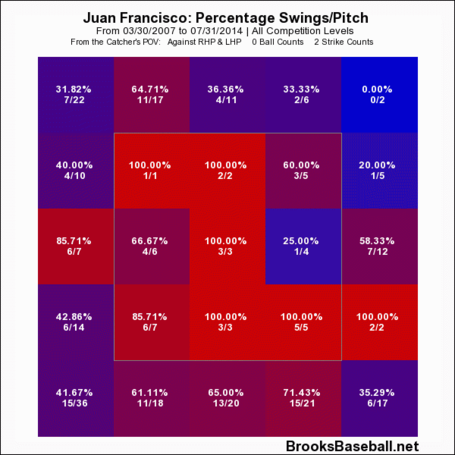 At the end of the day Francisco is simply a player with extreme strengths and extreme weaknesses. He can't hit lefties, he can't run, and he can't hit from behind in the count. What he can do is absolutely destroy baseballs. The 131 wRC+ and 16 home runs he brought into last night's action are proof of that. He is simultaneously infuriating and glorious to watch, that's Juan being Juan.

However, the extremities of his game show us that there are times when you can shut it down as a fan. When Francisco is down 0-2 you can pretty forget about it.

Except the thing is that you can't. A .108 average may be downright pitiful, but if you're a true fan it will probably keep you in your seat. Even if Francisco is going to strike out in almost every 0-2 count there's a always a very remote chance something good will happen. That sliver of a chance is enough.

In order to crush that chance you have to be a little more specific. To take it a step further, the chart below shows what Juan Francisco has done against southpaws in a 0-2 count:

It should be noted that this is not through 0-2, but on the 0-2 pitch specifically. As a result it would be impossible to draw a walk here, but a chart needs columns.

Nevertheless, it is a portrait of hopelessness. If you see Francisco down 0-2 to a left hander it's safe to change the channel.

But if you do you could miss out on something incredible.

After all, there's a first time for everything.