The boys in blue kick off a tough little eight-game road trip tonight at 10:00 pm Eastern, as they face off against fellow wild card chasers in the Seattle Mariners. The M's haven't scored a ton of runs this year, but have also allowed the lowest amount of runs in the league (by a margin of ten) so it wouldn't be a stretch to expect a few low scoring games in the upcoming few days. There hasn't been a lot of offence from any of the Seattle players other than superstar Robinson Cano, who currently has a .332 AVG and a impressive .398 OBP. If you'll recall, the Mariners were also able to acquire Austin Jackson for Nick Franklin at the deadline, which doesn't seem very fair.

On the pitching side of the ball, Seattle's top three starters in Felix Hernandez, Hisashi Iwakuma, and Chris Young have been dominant. Luckily for the Blue Jays, they don't have to face any of these pitchers during this series. HAHAHA just kidding, they have to face all three of them obviously. Their bullpen has been pretty nasty too, with the enigma that is Fernando Rodney closing out games. 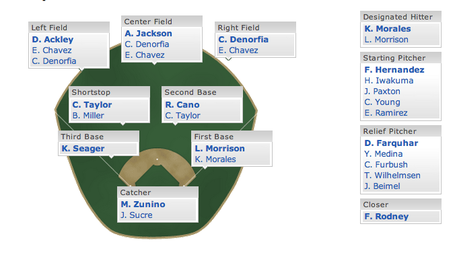 The pitching matchup this evening is Felix Hernandez against Drew Hutchison, which is a fair battle in terms of number of letters in their last names at least. The Venezuelan won his Cy Young in 2010 with a 2.27 ERA, so it seems like a safe bet to pick him to win his second one this year considering he is currently sporting a 1.97 ERA and a 2.04 FIP. He's hardly surrendering walks this season, as seen in his 4.8% BB-rate, although you'd have to think his 5.3% HR/FB rate is making everything look a little bit than it actually should.

The 28-year-old still has his fastball, sinker, changeup, curveball, and slider, although the velocity is certainly not what it used to be. Hernandez has a remarkably similar repertoire against righties and lefties, with only the slider and curveball being used against same-handed and opposite-handed hitters respectively. In the 2014 season, 30% of his pitches have been changeups against batters on both sides of the plate, which is a little different than the days when his changeup was rarely thrown to righties.

The changeup wouldn't be an issue against right-handed hitters if they could identify it out of his hand considering it's never in the strike zone: 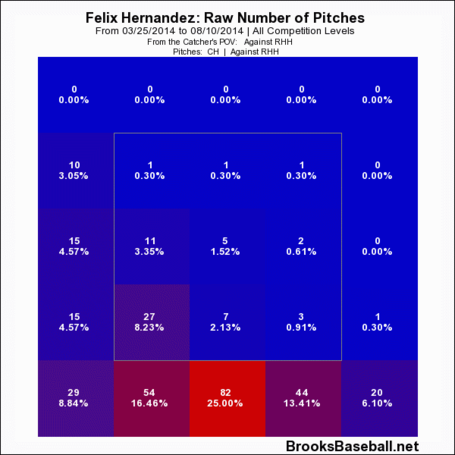 Drew Hutchison and Brad Mills might have to take this one the distance tonight, while Seattle will likely be without their closer Fernando Rodney.

Find the link between Felix Hernandez and the Yankees Italo-Venezuelan backstop.