Now that the Blue Jays have more than just Brad Mills out of the bullpen, this game seems like it could be a little more winnable tonight. The newly dependable J.A. Happ goes up against righty Chris Young in an interesting pitching matchup, which is more than you could have said about these two about a year ago. Young is a 35-year-old righty from Dallas who has bounced around the major leagues since he was drafted in the third round of the 2000 draft by the Pittsburgh Pirates. Young has flashed some promise through his decade-long major league career, but has faced an endless list of injuries and surgeries in the past few years that always stopped him from stringing together a solid full season.

The EXTREME fly ball pitcher has spent most of his career in parks like Petco, Citi Field, and Safeco so he's been pretty protected from the dangers of producing some of the lowest GB/FB rates of all-time. The 6'10" righty has never had a BABIP over .300 and actually has a career .251 BABIP, which is quite unheard of. Chris Young looks extremely boring on the surface, but when you start to look into it you discover he's some sort of enigma. His 3.27 ERA this season is pretty sexy, but his FIP of 4.75 begins to show the true talent, and the xFIP of 5.14 really shines Young in a negative light. It's debatable how long his .229 BABIP and 23.2% FB-rate can last but for the time being, it's quite an interesting story to follow.

The weirdness continues with Young when you look at his repertoire that is mainly made up of just fastballs and sliders. The massive righty only averages 86 mph with his fastball and throws it nearly two-thirds of the time. His slider hits the radar gun in the high-70's and seems to cause hitters more problems than you would expect as it only has a .176 batting average against. It seems that Young has slowly started to ditch his fastball for the slider, but he's still pretty predictable: 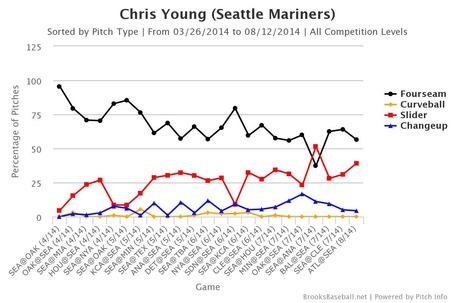 Find the link between Chris Young and the MLB leader in ERA, FIP, being amazing, and xFIP.