Jose Bautista is learning to channel his inner Munenori Kawasaki

There are very few things that Jose Bautista should look to steal from Munenori Kawasaki's game. That doesn't mean there are none.

Share All sharing options for: Jose Bautista is learning to channel his inner Munenori Kawasaki

On a surface level there aren't a lot of similarities between Jose Bautista and Munenori Kawasaki.

Truth be told, on a deeper level there aren't either. Bautista is a masher of baseballs and taker of walks who is one of the elite players in the MLB. Kawasaki is a replacement-level guy of unremarkable talents who just happens to be wildly entertaining to watch. Any comparison between the two players' skill sets would be completely and utterly laughable. However, that doesn't mean that their results are never similar, at least in one facet of the game.

One of the appreciable differences between Jose Bautista's output in 2014 and what he has done in the recent past has been a tendency to go the other way more frequently and with more success. This departure from a complete reliance on pulling the ball has led to by far his highest average (.295) and BABIP (.306) since his career year in 2011. Additionally, his output taking the ball to the opposite field is beginning to mirror his Japanese teammate, who has long been considered a master of hitting the ball the other way.

So far this season the statistical similarity between the two in opposite-field hitting is downright eerie.

It just doesn't look right to see these two names this close to each other, in any statistical measure. The sample size is small because a players hit only so many balls in play in a single season, but it's strange to see nonetheless.

Perhaps what's more strange is to see Bautista getting good results going to right field. Since 2010 when he decided to become Jose Bautista as we know him, he's had minimal success going the other way.

One theory is that Bautista has started beating the defensive shifts he's been seen. Both Jeff Sullivan and Brendan Kennedy have covered that point, so I don't want to delve too deeply into it. However, I will say that I'm skeptical of the reasoning.

In theory, if Bautista was consistently hit into the hole left vacant by he would have done so by hitting ground balls and line drives. However, this season Bautista opposite-field ground ball rate (22.2%) and line drive rate (17.3%) are virtually identical to his career averages (22.8% and 15.0% respectively). Instead the slugger has had more of his fly balls to right field fall in. 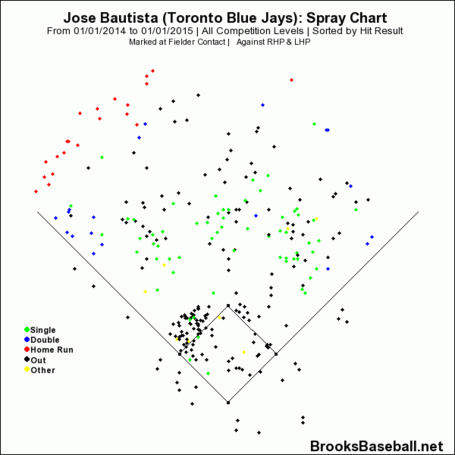 The green dots on the right side of this image show that 34-year-old has dropped a tonne of hits into shallow right field this season. This chart is based on where the fielder first touched the ball, so there are a couple of ground balls there, but given that Bautista's opposite-field GB/FB ratio of 0.38 it's safe to say most of those are shallow flies, bloops, or liners.

Opposing outfielders need to respect Bautista's power and as a result there is a lot of room in right field to dump hits in front of them. It seems obvious, and yet it's not something the Dominican slugger has done with much regularity before. For a frame of reference below is his spray chart from 2013. 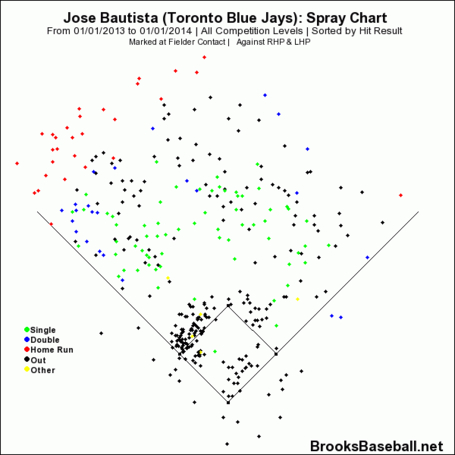 The sparsity of hits to shallow right field is apparent in this picture. Bautista improving his BABIP to right isn't simply a matter of getting more balls to fall in, something that Lady Luck has a major hand in, it also has to do with consistently hitting to a spot where outfielders can't afford to play him. Munenori Kawasaki encounters a similar phenomenon when he is able to-very occasionally- drive balls past outfielders that play him to hit like Bartolo Colon, even though that's probably a smart move by opposing teams.

In pretty much every other way, they just aren't, no matter what their opposite-field hitting stats are like. Any comparison between the two players in inherently flimsy and ridiculous. Even so, the fact that there is any reason to compare the pair is interesting, ridiculous or not.

Besides, if you don't think the ridiculous is interesting you probably aren't a big fan of a player who came out of nowhere at age 29 or the most GIF-able Japanese import since Pikachu anyway.

*All statistics are going into last night's game. If you think I'm going to wait for stats to be updated after a Pacific game is over and then do recalculations then I'm flattered by your high regard for my work ethic, but you are sorely mistaken.