Share All sharing options for: Jays lose to Mariners, again

I hate games like that. Mariners' starter Chris Young seemed to be getting calls off both sides of the plate and getting high strikes. J.A, Happ couldn't get a call at the bottom of the zone at all. Then, in the 8th inning, Munenori Kawasaki gets rung up by the 3rd base umpire on a checked swing that was no where close to swing. After that, of course, we gets some hits and some runs.

Let's look at the Brooks charts. 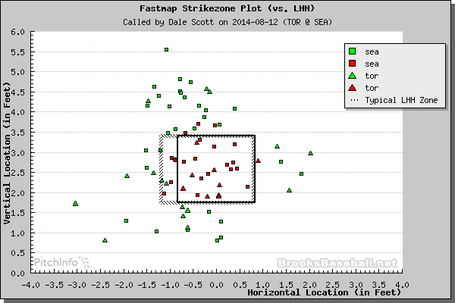 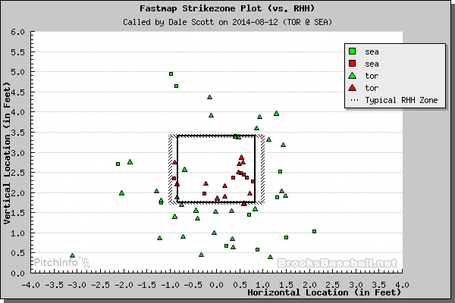 I really don't understand why Gibby didn't go nuts and get himself thrown out. I wouldn't have been able to keep my temper in check.

Happ went 6 innings, allowed 7 hits, 5 runs, 4 earned, 1 walk and 1 strikeout. He gave up 2 home runs. A Colby Rasmus error (with the crappy throw that followed) cost him a run. He was in a pretty bad spot. He seemed to be doing a good job of painting the bottom of the strike zone but he wasn't gettign the calls. Then he had to throw to the middle of the zone and, well, those pitches got hit hard.

Aaron Loup pitched 2 innings and gave up 1 unearned run, caused by his own error. On a ground ball to first, Loup just missed the throw first baseman Danny Valencia.

On offense, we only had 6 hits. We did score the first run, in the first inning. Jose Reyes led off with a walk and Melky Cabrera doubled him home. It would have been nice to score more than the one run there.

We made the game close, for a moment, by scoring 2 in the 8th. After the awful call on the checked swing strike on Munenori, Reyes and Cabrera each singled and Jose Bautista doubled to bring Reyes home. Pinch hitter Nolan Reimold almost hit one out, but it was caught at the track, scoring Cabrera, making it a 2-run game (until Loup's error). We couldn't score against Rodney in the 9th.

We had 1264 comments in our GameThreads. Pikachu, again, lapped the field. Great job.