The series finale goes tonight at 10:10 EST as the Blue Jays try to avoid a painful sweep at the hands of the Mariners and reverse the growing bleakness surrounding their playoff position. Wily old veteran R.A. Dickey gets the ball at Safeco this evening as he faces off against Japanese starter Hisashi Iwakuma, who is in the midst of another dominating season. In a 2014 campaign that looks remarkably similar to his 2013 year, the righty has a 2.86 ERA and a 3.18 FIP, while having a minuscule 2.2% BB-rate. It seems Iwakuma is criminally underrated thanks in large part to playing in Seattle and sharing a rotation with Felix Hernandez. Mariners fans should feel extremely fortunate to have Iwakuma playing out a two-year $14 million contract with a $7 million option for next season. In free agency you would have to think that the righty could land a contract about five times that size.

Hisashi Iwakuma has a style similar to Japanese counterparts Hiroki Kuroda and Yu Darvish, focusing on a sinker, slider, and splitter combination of pitches. The sinker thrown by the righty is the shuuto that is so popular among right-handed pitchers from Asia, as it features a reverse slider action that breaks in on the hands of same-handed hitters. Iwakuma's isn't quite as good as Kuroda's or Darvish's, but it does a good enough job setting up the slider and splitter. 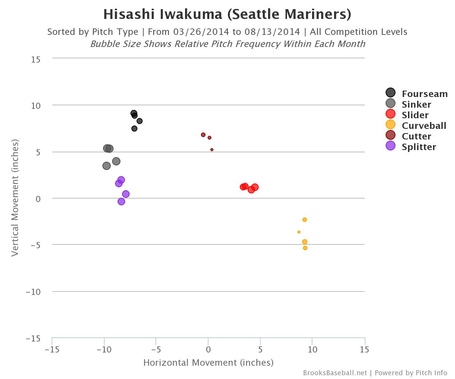 The splitter is undeniably Iwakuma's bread and butter, with seemingly every at-bat being an attempt to get in a pitcher's count so he can embarrass the hitter with the nasty pitch. If hitters find themselves in an unvfavourable count, then there's a solid chance that the splitter is coming and an even better chance that they won't be able to do anything with it. The pitch actually has a 709.9 GB/FB rate this season, so it's pretty clear that the amount of damage you can do against it is minimal. It's also only had four extra base hits off of it this season to go along with 23 singles, although two of the extra base hits have been home runs! Iwakuma also has "dog whisperer" command over the pitch, always starting it in the bottom of the zone and dropping it off the table glove side: 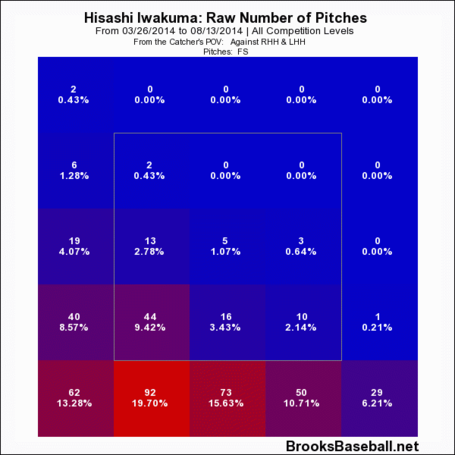 Find the link between Hisashi Iwakuma and the winner of the best actor award at the Cannes Film Festival in the year that Adam Lind was drafted.