I Went to the Market to Realize My Soul 'Cause, What I Need, I Just Don't Have: Anatomy of an Empty Batting Average

Share All sharing options for: I Went to the Market to Realize My Soul 'Cause, What I Need, I Just Don't Have: Anatomy of an Empty Batting Average 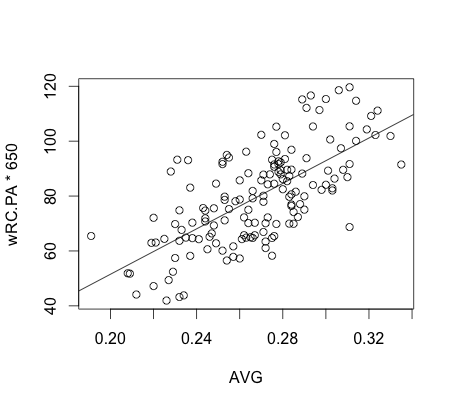 So there's obviously a very strong trend where higher average is correlated with better hitting but, as expected, there's a lot of spread (i.e., batting average accounts for less than half of overall variance in wRC). Based on this model, I decided to identify which players were the strongest outliers (i.e., which players had the emptiest or the "fullest" batting averages) by finding the difference between their actual wRC and the wRC expected based on their batting averages.

As long as the Blue Jays are concerned, their hitters run the gamut from Edwin Encarnacion (+35 runs per season but he did not qualify for the initial sample) and Jose Bautista (+23) to Ryan Goins (-26) and Munenori Kawasaki (-21). So the next time someone tells you that Ryan Goins is an acceptable everyday second baseman at this point in his career, you can tell them his bat isn't nearly as good as that .197 batting average would indicate.