The Blue Jays make the rare trip to Miller Park in Milwaukee for a two-game set this week after sweeping the Brewers in a similar two-game series back at the Rogers Centre at the beginning of July. Back during the Canada Day game against Milwaukee, the Blue Jays were seven games above .500 and one game ahead of the Orioles....how things change. The Brewers are still surprising everyone though, currently sitting at 70-55 and 2.5 games ahead of the Cardinals in the National League Central. It seems like only a matter of time before St. Louis puts it all together and overtakes the Brew Crew, but it certainly hasn't happened yet.

An interesting pitching match-up tonight sees J.A. Happ take on righty Mike Fiers. The 29-year-old from Florida was recalled from Triple-A Nashville a few weeks ago to replace the injured Matt Garza and has pitched tremendously in his two starts thus far. In 14.0 innings since the promotion, Fiers has allowed just one run and in his last start against the Cubs he struck out 14 batters in just 6.0 innings of work (that's mental). He was drafted in the 22nd round of the 2009 draft and hasn't made much of an impression at the big league level although he has dominated in Triple-A this year as well.

The righty has a fairly unspectacular repertoire that features a low-90's fastball about 60% of the time, while changeups, curveballs, and cutters make up the rest. There's a good chance that a lot of Fiers numbers right now are small sample size magic, but he's located effectively and has made the most of his average-ish stuff. Blue Jays hitters better be prepared for his curveball though, as it has some nasty drop to it and it seems that hitters aren't able to recognize it very well at this point: 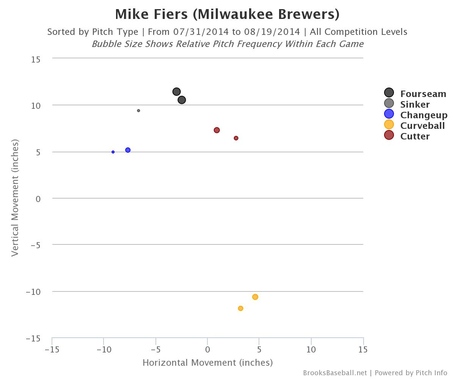 Oh no, pitchers get to hit.

Find the link between Mike Fiers and Daryl from the #1 most watched zombie show on TV.