The denouement of the season continues this afternoon in the state of Wisconsin as the Brewers look to finish off the sweep against the Blue Jays in this quick little two-game series. R.A. Dickey takes the mound for the Blue Jays and will probably have to allow zero runs as well as hit the game-winning solo home run if he hopes to win the game. The knuckleballer goes up against Jimmy Nelson, who is another Brewers starter that I've never heard of. He was recalled from Triple-A Nashville when Marco Estrada was pushed to the bullpen and he's fit in pretty well so far.

Drafted in the 2nd round of the 2010 drafted out of University of Alabama, the righty was a fairly high-ranked prospect in the Brewers system and made a steady climb through the minor leagues with very few hiccups. In seven major league starts this year, Nelson has a 3.86 ERA and a 3.73 FIP to along with a 53.9% GB-rate so it sure seems that the righty is a ground ball pitcher.

The tall 25-year-old features a reliever's repertoire, focusing on a heavy dosage of sinkers and sliders. Nelson is far from a contact pitcher though as his slider has 44.71 whiff/swing rate, which is pretty surprising for a two-pitch pitcher. This next chart should strike fear into anyone who watches the Blue Jays a lot, since none of their power hitters can seem to lay off this outside slider regardless of who throws it: 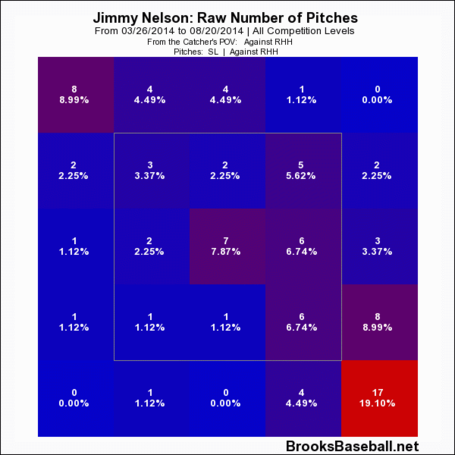 Find the link between Jimmy Nelson and the best starting pitcher on the Mets.