Stringing together base hits is a solid strategy to score runs, and scoring more runs than the opponent is the most important key to victory.[citation needed] The Blue Jays realized that today as they notched a win over the Brewers, by scoring 9 runs compared to the Milwaukee's 5.

Starter R.A. Dickey didn't have a great outing, giving up eight hits, a walk, and two hit batsmen en route to five earned runs. He was fooling a few Brewers hitters at the beginning of the game with a mixture of hard 80-mph "angry" knuckleballs and a few high-60 flutterbys.

His line would've looked a lot better if John Gibbons had taken him out an inning earlier. Dickey had already reached 90 pitches through five, but in a perplexing decision, Gibbons decided to allow Dickey to bat for himself in the top of the sixth with one on and one out in a 3-3 game.

Milwaukee was the first to score, Gerardo Parra doubled to begin the bottom of the second inning and was scored on a blooper by Jean Segura to right field. Segura slid into second for a double but Jose Bautista's throw went past second base. With no backup from Danny Valencia at third or Melky Cabrera from left, Segura managed to advance to third base on the error. Luckily, dumb National League rules meant that pitcher Jimmy Nelson batted next, and he struck out to strand the runner.

The Blue Jays nearly gave up a run on another throwing error in the bottom of the fourth on a Parra triple off the wall in right-centre field. Colby Rasmus caught the ball off the wall, then threw it accurately to cutoff man Munenori Kawasaki, but then Kawasaki threw offline to third where Danny Valencia was unable to block the ball after it bounced on the dirt in front of him. The ball was destined for the third base dugout, but R.A. Dickey was right there to backup the play to prevent Parra from scoring...at that time at least. Later in the inning, Mark Reynolds slammed a Dickey offering to deep left field. Cabrera tracked the ball and jumped in front of the wall, but the ball bounced in and out of his glove as his back slammed into the plexiglass that covered the outfield scoreboard with an audible "thud". It looked like he jumped because he thought he was closer to the wall than he really was, but the good news is that although he looked like he was in some pain, he remained in the game. After the Reynolds double, Gibbons ordered Dickey to intentionally walk Segura because stupid National League rules meant that the pitcher batted ninth.

Dickey led off the Blue Jays' half of the fifth with a ground out (I'm not sure if it's clear enough that I am not a fan of pitchers batting), but then then the top of the order came through to tie the game 2-2. First, Jose Reyes double down the right field line, Melky Cabrera brought him in with his own double, a ground-rule variety just past right fielder Parra's glove on the warning track. Jose Bautista struck out, completely whiffing on a Nelson breaking ball, before Edwin Encarnacion hit a two-out single up the middle to score Cabrera.

The tie didn't last long as the Brewers got a run back the very next half-inning on a Danny Valencia throwing error on a tough play (although he atoned for it by starting a 5-4-3 double play right afterwards). An interesting moment happened on the broadcast, when home plate umpire David Rackley gave Dickey a gift strike call against Gerardo Parra, both Buck Martinez and Joe Siddall remained silent for a good 15 seconds.

Going into the sixth, the Brewers were holding a 4-3 lead with the pitcher's spot due up fourth, and with Aaron Sanchez warming up, I thought that we were likely going to see a pinch hitter for R.A. Dickey unless the Blue Jays went 1-2-3. They didn't. After a Valencia fly out, Josh Thole showed off his almost-to-the-warning-track power, hitting the ball hard for a ground rule double, Munenori Kawasaki then followed up with a game-tying RBI double to the left-centre field gap. But, as mentioned above, Dickey was allowed to strikeout for himself for some reason.

Luckily for John Gibbons, the offense stepped up by continuing the rally with two outs against reliever Zach Duke. Kawasaki scored when Jonathan Lucroy dropped a Ryan Braun throw home on a Jose Reyes single. Melky Cabrera followed with a single to bring up Bautista. After a double steal, Joey Bats slammed a three-run homer to the Brewers' bullpen to make it 7-3 Toronto.

The Brewers got two runs back in the bottom half of the inning when Jean Segura legged out a bunt, just beating out a fantastic off-balanced throw by Dickey before Carlos Gomez destroyed a Dickey knuckleball, sending it to the second deck for a two-run homer. Aaron Sanchez came into the game in relief and got a quick out by grabbing a bouncer over his head.

The Blue Jays flirted with danger in the bottom of the 8th when Brett Cecil let two Brewers on around an out, but then Dustin McGowan came in to induce Jonathan Lucroy to ground into an inning-ending 1-6-3 double play.

With two outs in the top of the ninth with a 7-5 Blue Jays lead, Ryan Braun slid in an attempt to catch a shallow flyball off the bat of Encarnacion but it bounced out of his glove for a single. Marcus Stroman entered the game on his fifth pinch-running appearance right before Colby Rasmus homered to almost dead centre to make it a 9-5 game. Stroman scored the first run of his career, joining a select club of Blue Jays pitchers who have scored a run.

The home run eliminated the save situation for Casey Janssen but gave the Blue Jays a nice cushion going into the ninth. Janssen wrapped up the Toronto victory with a 1-2-3 ninth, striking out two in his inning of work.

The victory was just Toronto's fifth in August, and the nine runs scored was the most since the 14-1 victory over the Red Sox on July 28. 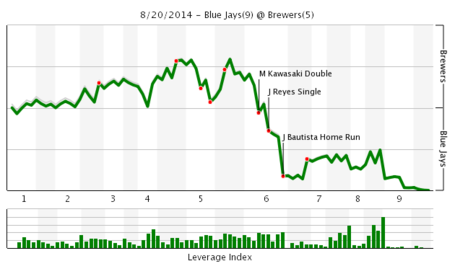 The Blue Jays get over 48 hours off now with an off day tomorrow and an evening game on Friday. They will be back home to face the Rays at 7:07 pm (don't look now, the Rays are just three games behind the Blue Jays and Yankees) with today's pinch runner facing the happy face illustrator (Drew Smyly). Jamie Campbell notes that Friday's game will be the Blue Jays' 6000th regular season game in franchise history since their founding in 1977. The franchise as a 2967-3029-3 record (.495 winning percentage).

Since there is no Blue Jays baseball Thursday night, if you are in Toronto you should consider coming out to the sixth PITCH Talks, which will feature Shi Davidi, Sid Seixerio, Andrew Stoeten, Stacey May Fowles, Jeremy Taggart, Erin Valois, and Jenn Smith. Left Field Brewery will be there to serve beer and if you use the discount code "Maris" you get $5 off admission (ie. a free beer!). Hope to see many of you there. For those of you who choose not to come, you should tune into Ben Wagner on Bisons.com as Dan Norris and the Buffalo Bisons face the RailRiders at 7:05 pm at Coca-Cola Field.

The GameThread had 843 comments, JaysCraze was the big winner. Great job.