The Blue Jays return home for a weekend series with the Tampa Bay Rays beginning this evening at 7:07 pm. This nine-game homestand against the Rays, Red Sox, and Yankees is essentially the set of games that will decide whether the Blue Jays have any chance of making things interesting in September. If they can manage to come away with something like seven wins, there will still be hope of making a late push for the second wild card. The Rays are also trying to get back in the playoff race, but they've lost some of the steam they had earlier in August and now sit at 62-65 after dropping four of their last five against New York and Detroit.

Drew Smyly gets his fourth start for the Rays tonight, going up against Marcus Stroman who is trying to rebound from his atrocious outing last time out against the White Sox. Smyly, a lefty, came over from Detroit in the David Price deal and has continued his solid season down in Florida. After being picked in the second round of the 2010 draft, Smyly made his major league debut in 2012 and had amassed 1.154 years of service time before this season, meaning he will likely be a super two player after this year.

The southpaw sticks to three pitches, with his fastball leading the way with over 50% usage, while his cutter and curveball make up the rest. It's slightly unusual that a lefty like Smyly doesn't really throw a changeup, preferring to use his curveball/slider pitch against opposite-handed hitters instead. The jury is kind of out on whether his breaking pitch is a curveball or slider, but what matters is that hitters are having a hard time doing anything other than hitting the ball on the ground against it, which is a bonus for the predominantly fly ball pitcher. You can decide for yourself whether the pitch is a curveball or slider: 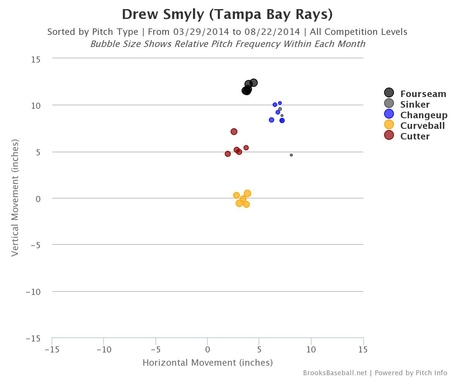 via Bless You Boys

Find the link between Drew Smyly and the Bronze Star recipient who died on April 12, 2001.