The Blue Jays try to get something started this afternoon at 1:07 pm from the Rogers Centre as time is slowly starting to tick down on their playoff chances. Is the season over? Is it not over? I don't know. Mark Buehrle goes up against Jeremy Hellickson who is making only his seventh start this year after undergoing elbow surgery near the beginning of spring training. The righty has returned to the rotation in fine form, currently sitting at a 2.56 ERA and a career-low walk rate of 6.1% in his first season of arbitration eligibility.

The book is pretty much out on Hellickson by now, with the righty throwing mainly fastballs and changeups against hitters on both sides of the plate, which isn't exactly common. His changeup has some cutting action to it, but it's still pretty surprising how such a simple and unorthodox repertoire for a starter has been so successful for Hellickson over the past few years. The two different WAR measures value Hellickson quite differently as his FIP is always much higher than his ERA leading to a career 4.7 fWAR and a 7.9 rWAR based on the different way the two totals are calculated. 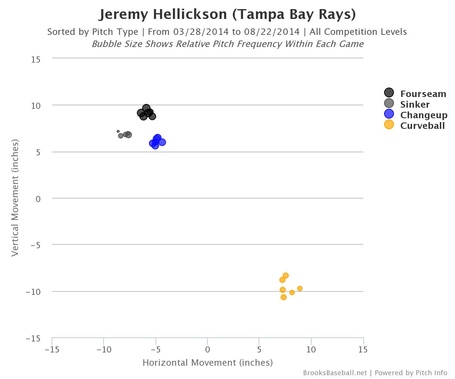 Another weird part of Hellickson's game is that almost all of his pitches end up on the arm-side of the plate, which leads to a lot of changeups in on the hands of right-handed hitters. If you like pitchers with quirks, then Hellickson is your Picasso: 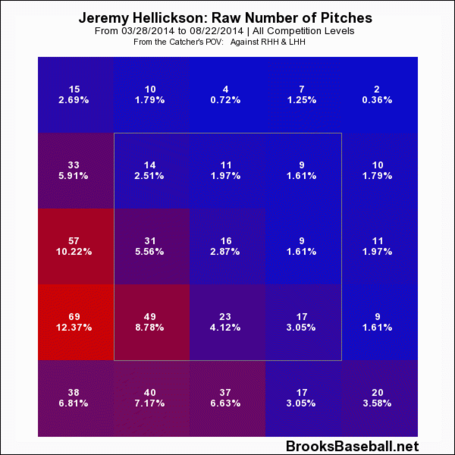 Find the link between Jeremy Hellickson andthe player featured in this article.