The Yankees come to town this evening as the teams kick off a weekend series at a time when both squads are hanging on the edge of the wild card battle. New York is 6-4 in their last ten games and recently lost two of three in Detroit to the Tigers putting themselves at a record of 69-63, which is 3.0 games back of the second wild card berth.

Mark Buehrle gets another start tonight against fellow lefty Chris Capuano who continues to fill one of the multiple holes in the Yankee starting rotation. If you'll recall, Capuano made his first start for New York in Toronto on July 26th and has made five more starts since then going 36.1 IP thus far in pinstripes pitching to a 4.21 ERA. Capuano has cleaned up his walk-rate since joining the Yankees (4.4%), which is also what has happened with Esmil Rogers so....it's still okay to hate New York.

Since moving to a starting role with the Yankees, Capuano is throwing his fastball much less in favour of increased changeup usage against both lefties and righties. The changeup is how Capuano gets outs and hitters are often either whiffing on it (26.4%) or grounding out off the pitch (12.69%). It's shouldn't come as a surprise then that the southpaw keeps the changeup low and away from righties: 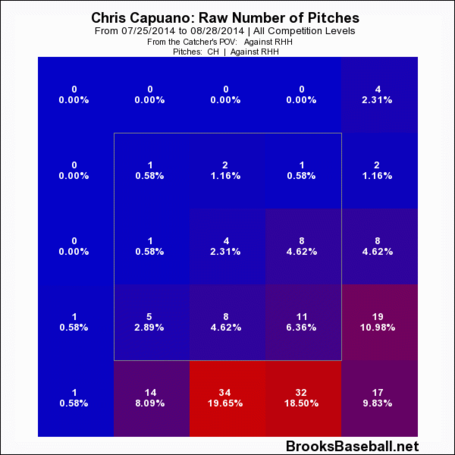 Everyone looks to be available for the Blue Jays, while standout Yankees reliever Dellin Betances has not pitched three days in a row all season, meaning he will not grace the mound in tonight's contest.

Find the link between Chris Capuano and the 2000 NL Rookie of the Year.