Share All sharing options for: Blue Jays minor league playoffs hopes and Around The Nest - Week 22

Summers must have been longer when I was a kid than they are now. I can't believe that this is already the last Friday of the minor league regular season, and thus the last regularly scheduled episode of Around The Nest, the Blue Jays minor league podcast hosted by Jesse Goldberg-Strassler, who invites the broadcasters from each farm team to come onto the show to answer questions. But is this truly the end? Perhaps there will be a wrap-up episode next week, perhaps not. We'll have to wait and see.

As with every week, the podcast broadcasts live right here at 5 pm Eastern.

Before the show begins, be sure to add your most pressing prospect questions in the comments below. Here is last week's show:

The major league Blue Jays are now 67-66 and are in third place in the American League East, sitting 9.5 games behind the Orioles for the division and 5.5 games behind the Mariners and Tigers for the second wild card (sorry for the reminder), but some of the Blue Jays' affiliates are in a better playoff position.

The D-Jays are currently 30-36 and 9.5 back in the second half of the FSL season, but they already clinched the playoffs when they won the first half championship, going 46-23 to lead the FSL North divsion. Right now it looks like the D-Jays will be facing the D-Cubs (of Daytona), the team currently leading the second-half North. Dunedin will host games 2 and 3 of the three-game division series.

Well, at least one baseball team in Canada are in contention for the playoffs: the Vancouver Canadians are 17-17 in the second half, but that's good enough for them to be in a first-place tie with the Tri-City Dust Devils in the NWL North. Two teams from each division qualifies for the playoffs--the first-half champs face the second-half champs. Even though the C's and the Dust Devils are all tied up, Vancouver is currently ticketed for the playoffs because they have a better overall season record (42-30 vs. 31-41).

One step down up from Vancouver, the Lansing Lugnuts are 29-37 and in last place in the Eastern division, but are actually just 1.5 games back from the playoffs.

How? The MWL follows a similar split-season format as the FSL and NWL. In the MWL, the top two teams in a division from each half qualify for the playoffs. The West Michigan Whitecaps and the South Bend Silver Hawks both qualified for the playoffs by finishing first and second, respectively, in the first half. However, they are currently tied for first place in the second half, which means the two second-half playoff berths fall to the third and fourth teams in the Eastern division. Right now there is a two-way tie for the fourth place spot, with three more teams within a game of that placement (the third place Lake County Captains have already clinched.) It won't be easy for the Lugnuts to run past four teams, but it could happen!

I was in Buffalo last Saturday to watch them destroy the PawSox (during Chicken Wing Bobblehead Night no less) and can report that watching a meaningful game between two playoff-contenders late in the season is quite fun. Maybe they should try that in Toronto some time soon.

The New Hampshire Fisher Cats (Eastern League, Double-A) have been eliminated. They are 65-73 and are 20 games back of the Portland Sea Dogs, who are an incredible 85-53.

The Gulf Coast League Blue Jays (Rookie) are most definitely eliminated, finishing with an 18-41 record in the GCL Northwest. 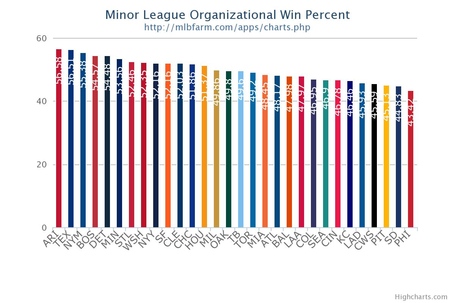