The Blue Jays try to salvage a series split with the Astros this afternoon at 2:10 pm as youngster Marcus Stroman faces off against Scott Feldman. The 31-year-old righty has been a pretty average pitcher his whole career, spending the majority of his 10 major league seasons with the Texas Rangers. He signed a three-year deal as a free agent this offseason with Houston that is worth $30 million. His numbers this year are pretty Scott Feldman-esque, as he has a 4.39 ERA and a K-rate of only 13.0%. Somewhat troubling for Houston is the fact that the normally high ground ball rate for Feldman has dropped to 42.6% leading to fly ball and line drive rates above his career norms.

The Hawaiian-born pitcher mainly throws a sinker, cutter, and curveball with his velocity topping out around the high-80's. Against right-handed hitters the sinker is the main fastball used, while lefties are much more likely to see his cutter. As you would expect, keeping the sinker low and away to righties as well as in on the hands is the name of the game for Feldman: 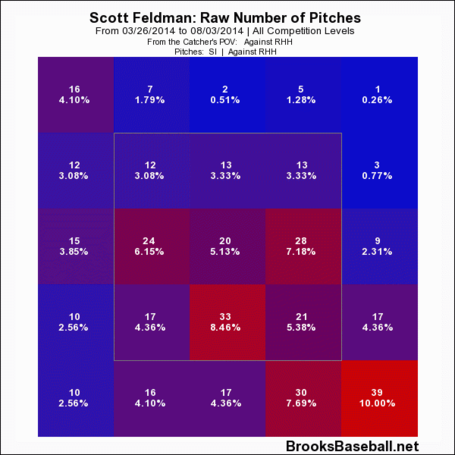 Aside from talking about Scott Feldman on this last game of the year against Houston, it seems like a good time to just take a look at Jose Altuve's contract and be reminded of the extreme value that the Astros are receiving from the Venezuelan. The second baseman who has nearly eclipsed 4.0 WAR this year is being paid $1.25 million in what would have been his final pre-arbitration year if he hadn't signed his four-year extension last season. Houston also bought out his arbitration years for $2.5, $3.5, and $4.5 million respectively. Beyond that, there's also two options tacked on to the end of the contract for $6.0 and $6.5 million. If Altuve continues to produce at his current rate, this contract has to be considered one of the biggest steals in the league. Bravo Jeff Luhnow.

Find the link between Scott Feldman and the subject of this fantastic Red Sox rant.