The hump game of this three-game series gets underway today at 1:07 pm as Drew Hutchison takes on Michael Pineda. If you'll recall, Pineda started the season pretty amazingly including a dominating performance against the Blue Jays before getting caught with pine tar all over his body on April 23rd which ended up being worth a ten-game suspension. While pitching in a simulated game during the suspension he hurt himself and was out until about two weeks ago when he returned the Yankees rotation and picked up where he left off.

In total he's made seven starts this year (four before the injury and three after the injury) and hasn't allowed more than two earned runs in any of them. His ERA currently sits at 1.95 and his BB-rate is a minuscule 2.9%, so it makes you wonder where the Yankees would be right now if Pineda hadn't decided to take a shower in pine tar earlier in the season.

In terms of what he's throwing, Pineda has stuck to his trusty fastball and slider combination which is still having fantastic results regardless of if the baseball is doctored or not. He's not putting up huge strikeout numbers like he used to and he's living and dying on a currently low HR/FB rate (3.7%) as seen by his 33.0 GB%, but it's worked so far so who am I to judge. It's time to guess which is these slider dots represents April (with pine tar) and which of them represents August (presumably no pine tar): 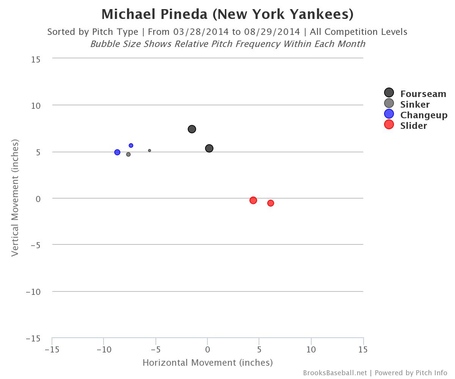 If you guessed that the slider had more movement back in April then you would obviously be correct.

Unfortunately I'm out of town today without internet so I have no idea who was used from the bullpen last night. Assuming that Mark Buehrle had a fairly good game, then all Blue Jays relievers should be available for this afternoon's game.

Find the link between Michael Pineda and the man in the news recently for throwing ice cream at a scout.