The Blue Jays get a rather important series underway tonight at the Rogers Centre as the division-leading Baltimore Orioles come to town. With a four-game lead in the AL East, it's quite the opportunity for the Blue Jays to gain some ground and avoid dropping out of the second wildcard spot with the Yankees close on their heels. The pitching matchup this evening sees lefty Mark Buehrle go to the mound against 29-year-old Bud Norris. The righty has started two games against Toronto this year, putting in two dominating performances. In 13.2 combined innings against them, Norris has allowed a single earned run, while striking out nine Blue Jay hitters. Beyond that, the California native has been the Orioles best starter this season and currently sports a 3.69 ERA.

Thankfully for the Blue Jays, the Orioles had to play a makeup game in Washington last night and would have only got to their hotel in Toronto very early this morning. Normally in a situation like this, the starting pitcher of the next day's game will fly to the city early to get enough rest for his start. That didn't work out so well for Norris though:

As mentioned in seemingly every preview about Norris, the right-hander throws mainly a fastball and slider and rather unremarkably pitches to contact to great effect. He's certainly been helped by the solid Orioles defence behind him this season, which is a big reason why they're four games clear of their competition in the AL East. The game plan of Norris is pretty predictable, with the righty throwing sliders outside of the zone to same-handed hitters inducing weak contact: 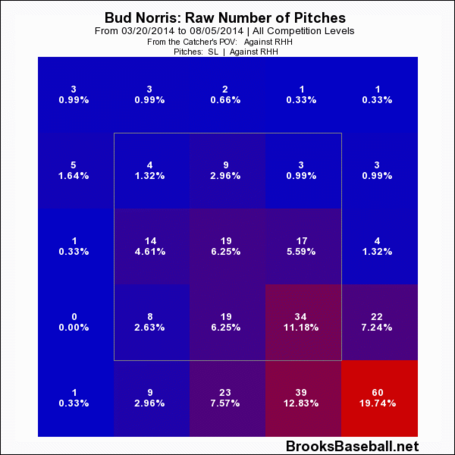 Find the link between Bud Norris and the person who's last season before retirement is being overshadowed by Derek Jeter's farewell tour.