The Blue Jays try to get back on track tonight against the Orioles in the second game of the "Series of Statement Games". Toronto now sits 5.0 games back of the division-leading Orioles, although it still is just August 6th. "Mr. Hit or Miss" Drew Hutchison takes on left-handed starter Wei-Yin Chen tonight, who has been Baltimore's second-best starter this season behind Monday's starter Bud Norris. His ERA currently sits at 3.76, while his xFIP is 3.70 to go along with a career-low BB-rate of 4.1%. The three-year $11.09 million contract he signed in 2011 is sure looking like a stroke of genius for the Orioles, as well as the added bonus of a $4.75 million team option for the 2015 season. Chen's last two starts came against Seattle, where he pitched a total of 15.1 innings allowing only one earned run.

Spectacularly, Chen has only faced the Blue Jays once in his entire career with the Orioles back in September of 2012, which is pretty unlikely considering how often the two teams face off against each other. The Taiwanese pitcher mainly throws a fastball, slider, and splitter with his hard stuff hanging in the low-90's and his fairly hard splitter coming in around 85 mph. Against left-handed hitters Chen sticks to his fastball and slider, while fastball, sinkers, and splitters are the name of the game against righties.

The lefty locates the splitter on the outer half against opposite-handed batters, which used to work to great effect, but has slowly lost its effectiveness as you'll see below: 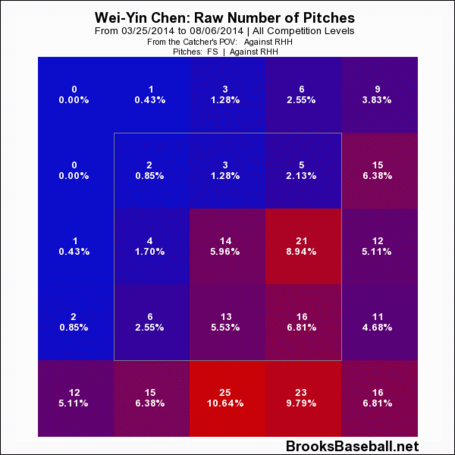 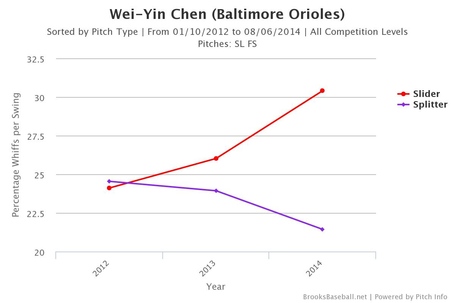 I'm just going to go ahead and assume Brett Lawrie is out for the game.

Find the link between Wei-Yin Chen and the only player in Red Sox history to wear the same number as Chad Johnson.