The Blue Jays are going to try and get back on track this afternoon after last night's horror show in the ninth inning. A fantastic pitching matchup sees last year's Cy Young winner Max Scherzer going up against 2015 Cy Young winner Marcus Stroman. The freshly-turned 30-year-old has continued his great pitching into this campaign, although there's been a slight drop off from his dominating season in 2013. His peripherals are remarkably similar to last year, but he has a .316 BABIP this season which has caused to ERA to be a slightly higher 3.24 compared to last year's 2.90 mark.

The fourseam, changeup, slider, and curveball are the go-to pitches for the St. Louis native, with the fastballs still hanging in the mid-90's. It's pretty wild how Scherzer is a completely different pitcher depending on who is up at the plate. Lefties see fastballs, curveballs, and changeups almost exclusively, while same-handed hitters only see the fastball and slider. Max's slider is his best off-speed pitch, although it has a .422 BABIP this year which has likely made his numbers look a little worse than they should.

Unlike most pitchers, who have a changeup that mimics the movement of their sinker, Scherzer's actually drops much more dramatically than his fastball as seen below in graph and GIF form: 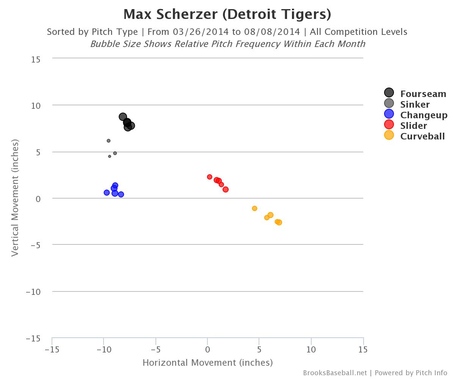 Find the link between Max Scherzer and the other pitcher who came to the Blue Jays in the J.A. Happ trade not named David Carpenter.