Aaron Sanchez is putting together quite a run in the Blue Jays bullpen, but his ability to get whiffs remains a question.

Share All sharing options for: Will Aaron Sanchez's Stuff Translate into K's?

It's very difficult to complain about what Aaron Sanchez has done so far.

Pitching as a multi-inning threat out of the bullpen, Sanchez has decimated hitters at the major league level out of the gate. The rookie has only allowed one extra-base hit in 21.2 innings of work and is making opponents look downright silly in the process. He has also demonstrated solid control, walking only three hitters, despite the fact he had serious problems with the free pass in the minor leagues.

Aesthetically speaking, Sanchez is great to watch. His sinkers have both potent velocity and dynamic movement, and he has the ability to throw a curveball that can be a thing of beauty. It doesn't take a scout's eye to see that the 22-year-old has incredible stuff.

However, eye-popping stuff can be deceiving. Countless pitchers have demonstrated what appears to be a top-notch repertoire only to fizzle out in the big leagues. It's important to pair what we see with objective data in order to complete the picture of player evaluation. Statistically speaking, Aaron Sanchez's first taste of MLB action has looked like this:

You can't ask for much more than that.

It appears that Sanchez has enjoyed a fair amount of luck on balls in play, but his sparkling 2.29 FIP indicates that's not the root of his success. The most impressive aspect of his performance has been his 6.67 K/BB ratio, which ranks 7th among MLB relievers with at least 20 innings pitched.

While all of this looks excellent, there is a red flag lurking in the shadows: Sanchez's inability to get whiffs so far. The right hander does have a healthy strikeout rate, but it is artificially inflated by the fact he already has 11 strikeouts looking.

Getting called strikeouts can definitely be a skill. However, it is a skill demonstrated by guys with outstanding control who can pick corners like Cliff Lee and, of course, Mark Buehrle. As a fireballer with a history of control problems, it seems unlikely that Sanchez is the kind of guy who can sustain a high called strikeout rate.

The location of the pitches that have gotten him these strikeouts looking helps confirm the notion that luck is likely to be heavily involved. 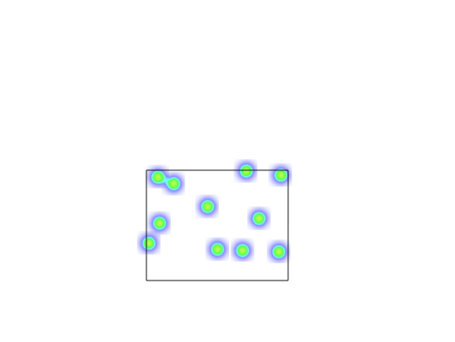 Generally speaking, these are the type of pitchers hitters swing for. Sanchez has picked a couple of corners, but he has also left some pitches right in the heart of the plate. We know that he has some deceptive movement on his pitches, but it seems that hitters' lack of familiarity with his repertoire could also be at play here.

Whatever the case may be, Aaron Sanchez does not appear to be a master painter of corners and as he will have to create whiffs in order to maintain a strong strikeout rate going forward. Based on what he's demonstrated so far, that could be something of a problem. The following Brooks Baseball Zone Profile shows Sanchez's whiff rate this season by location: 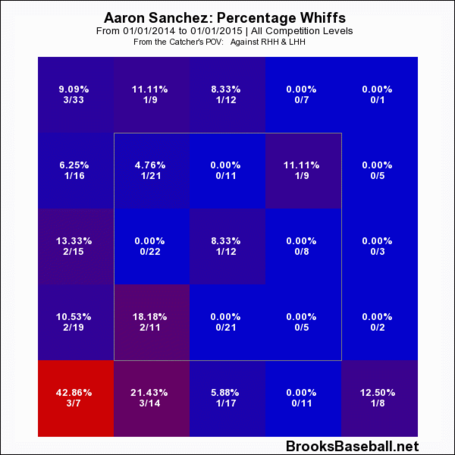 This is not particularly encouraging. In fact, Sanchez's swing strike rate of 6.7% would be tied for 6th worst in the MLB among qualified pitchers.

There are a couple of caveats that should be noted here. Firstly, Sanchez's work at the big league level is a small sample. It is more useful to look at statistics like swinging strike rate in a small sample because they are based on hundreds of pitches rather than dozens of events, but the sample is still small. Secondly, Sanchez is young enough to improve significantly, develop a new pitch, or find a grip that changes his existing arsenal.

While both of those things are true, based on what we know about pitcher aging curves it's apparent that most pitchers don't increase their strikeout rate over time. In fact, the opposite is true. 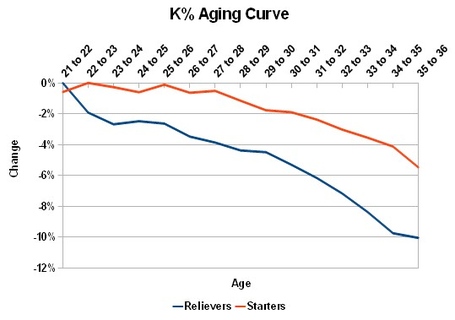 The fact that Aaron Sanchez hasn't had a K/9 above 8 since he was pitching for the Lansing Lugnuts may have been a clue that he was unlikely to be a huge strikeout guy. However, because he is young and his stuff is borderline legendary within the Jays organization, it was easy to assume the K's would just come.

The thing is that not all "great stuff" is the same. Getting whiffs is important, but another thing pitches with outstanding movement can do is produce weak contact. Striking out a tonne of hitters isn't the only way to be a great pitcher. It's always been easy to read an Aaron Sanchez scouting report and dream on him as the next Stephen Strasburg with the crazy velocity and the big curve, but it seems more likely his sinker is going to be what makes him his money.

With the relative bust that is Chad Jenkins fresh in the mind of Blue Jays fans, the notion of Sanchez as sinkerballer probably isn't all that appealing. It lacks the romance of "Aaron Sanchez: Power Pitcher", although there's no reason he can't be both.

Although his body ended up failing him, Brandon Webb proved that you can be a legitimate ace by getting groundouts rather than strikeouts. While a comparison to Webb might seem like a bit of a stretch, the minor league numbers the two pitchers put up were rather similar:

There are a couple of significant differences here. Webb wasn't as young as Sanchez for the levels he played at and he also demonstrated much better command. The similarity in win-loss records is more than of a curiosity than something to write home about, but that doesn't mean there's nothing here. The low home run numbers, similar WHIPs, and mid-range (for a legitimate MLB propect) strikeout numbers do stand out.

None of this is to say that Sanchez will harness the sinker and turn it into the one of the most lethal weapons in the game like Webb did. Webb was one of the greatest pitchers of his era and Sanchez has thrown just over 20 innings in the big leagues. The 65.4% groundball rate that Sanchez is sporting right now is downright Webb-esque, but it remains to be seen if he can keep it up.

Anyone who watches Aaron Sanchez can tell he has tremendous stuff. So far he has commanded it extraordinarily well and gotten off to an excellent start to his MLB career. As long as he can avoid the kind of control problems that plagued his years in the minor leagues there is no reason he can't be a great pitcher for the Blue Jays.

He just might not be the kind of great pitcher you were expecting.