Good pitch, good hitting and some nice defense, a great series for the Blue Jays.

Share All sharing options for: Blue Jays sweep the Cubs

And here I thought this was going to be a tough series. The Cubs came in on a good streak, I thought they were the type of team that might great against us. Boy, was I wrong.

It seems like it was just a few days ago that we were thinking Drew Hutchison was overworked and tiring. Wrong again. He looked great tonight. 6.1 innings, allowed just 4 hits, 1 earned, 1 walk with 10 strikeouts. He was hitting his spots and looked in control all the way. The Jays had him sitting for a long time, in the bottom of the 6th and he may have tightened up before he went out for the 7th. He gave up a home run and a double in the 7th and Gibby pulled him. With the deep bullpen, there's no reason to push his pitch count.

Brett Cecil, Aaron Loup and Brandon Morrow finished out the last 2.2 innings, each getting some needed work in. Morrow looked great, smooth and easy and he hit 100 mph on the radar gun. 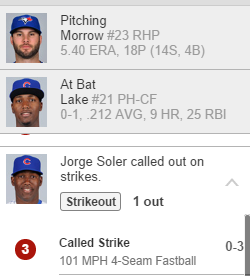 I wonder if we could talk him into closing for us next year?

Once again we had tons of offense. 13 hits and 5 walks added up to 11 runs. Not much for extra base hits, just 3 doubles, once again we scored a bunch without hitting any homers. And, once again, we got our runs late, 10 runs scored over the 6th, 7th and 8th innings.

Just about everyone got into the offensive fun. Dioner Navarro, Danny Valencia and Anthony Gose had 2 hits each. All the other starters had a hit except for Jose Bautista (who had 2 walks, so I won't complain) and Ryan Goins (0 for 4, but some nice defense). Edwin, Dioner and Danny had 2 RBI each. Adam Lind, Gose, Steve Tolleson and Dalton Pompey each had an RBI.

Dalton Pompey got his first MLB at bat, hitting a ground ball to first to bring in our 10th run. Nice that he had his first at bat in Toronto and in front of his parents.