The Blue Jays start a weekend series with Tampa Bay tonight that has a special feel about it this late in the season because it's relevant (for the first time in forever). While the Rays couldn't complete their epic midseason comeback and now sit at 70-77, the Blue Jays are just 3.5 games out of the second Wild Card spot with only the Mariners, Tigers, and Athletics in front of them for either Wild Card place. The pitching matchup tonight is a little underwhelming with J.A. Happ facing off against righty Nate Karns. After the Rays shut down Drew Smyly this week, Karns was recalled to take his place and tonight will be his first start with Tampa Bay. The 26-year-old came to the Rays in a trade with Washington this winter that included catcher Jose Lobaton,

Karns was drafted in the 12th round of the 2009 draft but shoulder surgery delayed his professional debut until 2011, after which he became one of the Nationals top prospects. Command issues slowed his ascent slightly, but he made his MLB debut last season and pitched not so well in three starts. In 27 starts with Triple-A Durham this year Karns has a 5.08 ERA, thanks in no small part to a BB-rate of 9.9%. There's no doubt Karns has the stuff to succeed at the major league level (including a mid-90's fastball), but he just hasn't been able to put it all together yet.

He mainly throws a fastball, curveball, and changeup, although his curveball has a hard break coming in at 85 mph. Obviously there isn't a ton of information on Karns yet, but here's how the movement of his pitches looks: 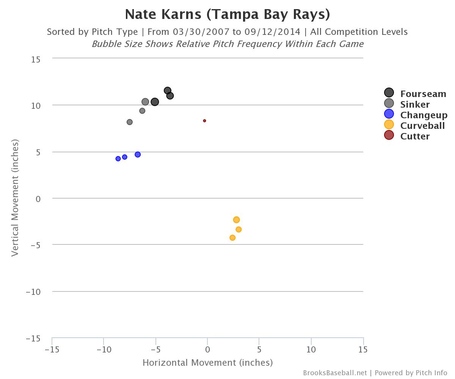 Looks like a full assortment for John Gibbons tonight, while Joe Maddon can probably call on all of his relievers as well.
Blue Jays
Rays

Find the link between Nate Karns and the actress who played the only female Cartwright member in the Bonanza movie in the 90's.