The final game of the series with the Rays goes today at 1:07 from the Rogers Centre. If you get there early enough you can grab yourself a nice Blue Jays satchel! Chris Archer goes for Tampa Bay and it will be his sixth start against Toronto this year, although it seems I haven't previewed one of his games yet which is pretty strange. After 29 starts this year the righty has a 3.63 ERA and a 3.31 FIP, which is beginning to look like a pretty fair yearly expectation of the North Carolina native.

To be honest, I'm a pretty big fan of Chris Archer even though he plays for a divisional rival and usually dominates the Blue Jays. He takes no crap even though he's a relative newcomer to the league and is mighty fun to watch when he's got his pitches working. Unfortunately the Rays locked him up to a wicked extension, which all but guarantees that he'll be facing the Blue Jays multiple times each season for years and years to come:

At this point in his career Archer has pretty much settled into his repertoire as a fastball and slider pitcher, but the movement on his pitches allows him to still be successful. The sinker darts inside on right-handed hitters, while the slider tails away with nasty movement. Observe: 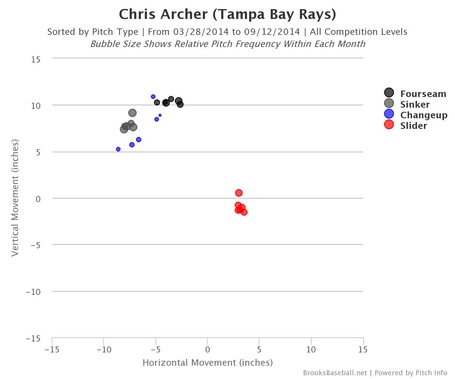 There's no bullpen usage for today because I'm actually in Toronto for the weekend (might even be at this game!) without a computer to update the post.

Find the link between Chris Archer and the man in this photo.