Adam Lind came to the major leagues as a left fielder, and now that part of the field is where he's making all his money.

Adam Lind has absolutely excelled with the bat this year.

To be fair, he's only really done so against right-handed pitchers, and he has missed some time so it's hard to call his 2014 an unmitigated triumph. After all, he's only been a 1.5 WAR player so far. That being said, Lind has made the best of the opportunities afforded to him and his 148 wRC+ ranks 14th among players with at least 250 plate appearances.

Although the 31-year-old has only six home runs to his name, that wRC+ would be the best of his career if it held up, exceeding even the total from his 2009 breakout season. A .369 BABIP in a smallish sample suggests that luck has been a factor, but Lind deserves credit for cutting his strikeout rate to a career-low 14.2% at a time when K's are at an all-time high.

While it would be hard to categorize 2014 as some kind of step forward for Lind given its incompleteness and his previous accomplishments, it is apparent that his game is changing slightly.

The first baseman has never been a slugger on the same level as Jose Bautista or Edwin Encarnacion, but his game has been characterized by power. His career ISO stands at .197 and he has produced 20 or more home runs four times. This year his ISO sits at a slightly-above-average .172 and the home runs aren't coming.

So what has Lind done to be so effective despite flagging power numbers? The answer is that he's crushed the ball the other way. The following table shows Lind's splits by hit direction this year.

Lind hasn't just been dumping singles into left field, he's mashed balls in that direction with regularity. In fact, if you took away his hits to left you'd be looking at a powerless ground ball hitter.

It's not as if this is completely unprecedented. Lind is known as a good opposite-field hitter and he does have a career 158 wRC+ going the other way. However, this season he has taken it to a new level. The chart below shows his hit direction every year since his 2009 breakout.

Traditionally Lind has pulled the ball about 40% of the time, but this year that number is down significantly. He has also cracked 30% of balls sent to left field for the first time in his career.

Because a picture is worth a thousand words, and maybe a hundred numbers (no one has come up with a good proverb for that yet), let's take a look at a couple of spray charts.

This is what Lind's career spray chart looks like: 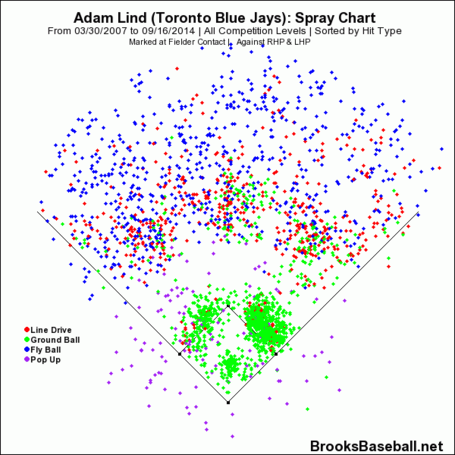 He's clearly been a hitter who has used the whole field. As recently as last year this is what he did: 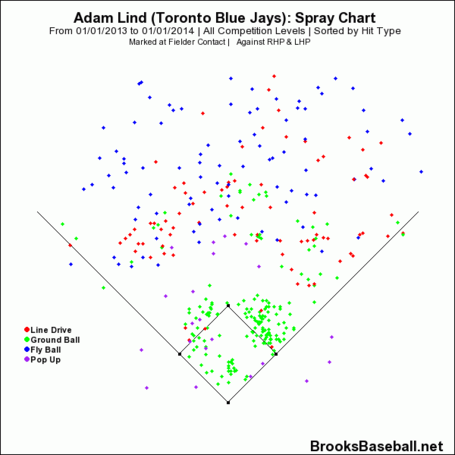 Once again, this looks pretty balanced. Things change significantly when you look at 2014: 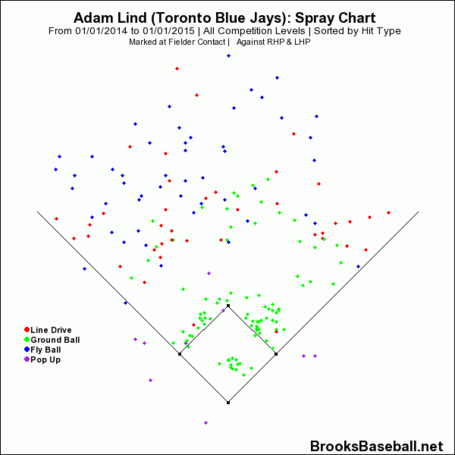 While the occasional line drive has found its way into right field, almost everything hit really hard has been to left or centre.

It's hard to say exactly what to make of this. Considering the relatively small sample Lind would probably have to repeat this pattern again next season to make it clear that this is an intentional change in approach.

If it is, teams may adjust with outfield shifting in order to combat Lind's opposite-field production. Perhaps pitchers will attempt to jam him inside and challenge him to turn on the ball. It's too early to know exactly how this plays out.

What we do know is that Adam Lind is doing something new. New isn't always good, but in this case it has been so far. Change may not always be for the better, but it does make things interesting, and right now Adam Lind is a pretty compelling hitter.

With the Jays slipping out of the playoff race, compelling might be the best we can do around here.